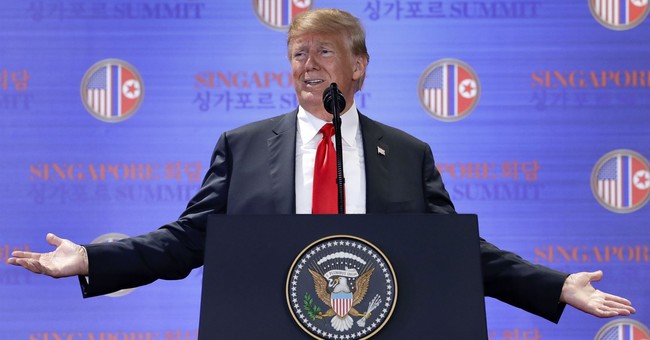 Well, well, well—what do we have here; FBI officials discussing a media leak strategy during the Trump-Russia investigation, specifically when key developments are about to be revealed to the public. The new batch of texts was released by Rep. Mark Meadows (R-NC), where disgraced former FBI Agent Peter Strzok and lawyer Lisa Page communicate about a possible media leak strategy between FBI and DOJ officials between April 10 and 12 of 2017. The Daily Caller has more:

“Our review of these new documents raises grave concerns regarding an apparent systemic culture of media leaking by high-ranking officials at the FBI and DOJ related to ongoing investigations,” Meadows wrote to U.S. Deputy Attorney General Rod Rosenstein in the letter, which was obtained by The Daily Caller News Foundation and first reported by Sara Carter.

In the first message, Strzok, who then served as deputy chief of the FBI’s counterintelligence division, wrote to Page that: “I had literally just gone to find this phone to tell you I want to talk to you about media leak strategy with DOJ before you go.”

Strzok was at that time the lead investigator on the FBI’s probe into possible collusion between the Trump campaign and Russian government. He joined the special counsel’s investigation after it was formed in May 2017. He was removed from the investigation in July 2017 after the discovery of anti-Trump text messages that he exchanged with Lisa Page. He was fired from the FBI on Aug. 10.

In one Aug. 8, 2016, message, Strzok told Page that President Donald Trump would never become president, because “We’ll stop it.”

Meadows wrote that “in the text, Strzok warns Page two articles are coming out, one which is ‘worse’ than the other about Lisa’s ‘namesake.'”

“Well done, Page,” Strzok wrote. It is unclear if he was referring to Lisa Page or Carter Page.

The text messages were included in a batch of records recently provided to Congress.

“A coordinated effort on the part of the FBI and DOJ to release information in the public domain potentially harmful to President Donald Trump’s administration,” wrote Meadows in a letter to Deputy Attorney General Rod Rosenstein.

Should we be shocked? No. Page and Strzok have been the lovebirds at the FBI, who seem to embody every concern conservatives have had concerning Trump, Russia, and the DOJ/FBI. In July of 2016, Strzok, then a top counterintelligence agent, was one of the key players in the initial probe, reportedly signing off on it. By May of 2017, then-FBI Director James Comey was fired, and Deputy Attorney General Rosenstein appointed Robert Mueller, who also served as FBI director, to be the special counsel on this investigation. He took over the DOJ’s probe. By August of 2017, Mueller found out about Page and Strzok’s texts, which were anti-Trump, pro-Hillary, and displayed the unprofessional and biased antics that would taint an investigation; Strzok was having an extramarital affair with Page as well. He was reassigned to human resources. Page was no longer part of the Russia investigation. There’s the “we’ll stop it” text concerning the Trump presidency and the cryptic insurance policy text after Page and Strzok had a meeting with then-Deputy Director Andrew McCabe in August of 2016. Both McCabe and Comey have been fired. That insurance is reportedly the Trump dossier, a piece of partisan political opposition research compiled by former MI6 spook Christopher Steele. Fusion GPS, who was retained by the Clinton campaign, hired Steele to dig up dirt on Trump, and some of the sources were former top Russian intelligence officials still active in the Kremlin. This document was reportedly used to obtain a spy warrant against former Trump foreign policy adviser Carter Page.

Strzok was hauled in before Congress, which was off the rails, where he said the texts aren’t indicative of bias, but of his patriotism. Even CNN wasn’t buying that garbage. The Strzok-Page texts number in the tens of thousands. Some appear to show the two pulling punches concerning the Hillary Clinton email probe, where they expressed concern that the bureau was going too hard on the now two-time presidential loser. Yeah, Strzok was also a key person in that investigation as well. A man who was critical in two of the most politically charged and sensitive investigations in recent memory—and the integrity of those probes are now forever compromised, with the FBI utterly embarrassed with Strzok and Page’s anti-Trump antics. In May, Page resigned. She also testified before Congress in July, where she said that the anti-Trump texts sent between them “mean exactly what they say.” Strzok was fired over these texts in August.

Since this whole Trump-Russia collusion clown show came to town, zero evidence has been found to suggest the president’s 2016 campaign team conspired with the Kremlin to tilt the election. Approval for the probe has sunk in recent months as well. Nothing has been found. It might be time to pack it up, no?