MSNBC Host: There's No Evidence That Kavanaugh Ally Threw Up A White Power Gesture And People Should Stop Saying It 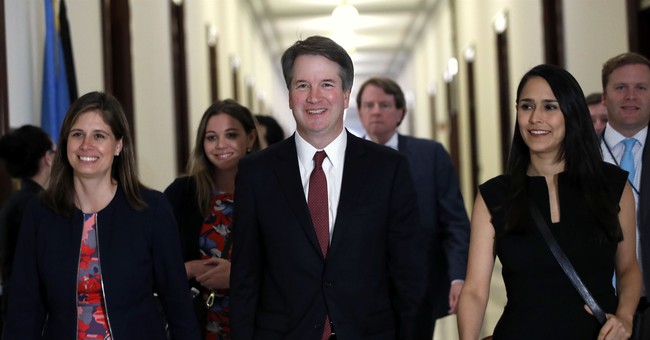 Zina Bash is a lawyer for the Trump White House. She’s been an ally of Judge Brett Kavanaugh, sitting behind him during his confirmation hearings. She reportedly was caught with her hands forming the A-Okay sign, which is supposedly a white power symbol. It’s not. Only left wing morons think so—and it took off like a brush fire. It’s shows the extent of Trump Derangement Syndrome. It shows how insufferable liberals are. It partially took over the first day of questioning, where Democrats, their trash allies, and other agitators tried to derail the hearing with incessant interruption. Scores of protesters were arrested—and the hearing moved on. To the Left, we won. We pick the judges now. So, sit there and shut up.

Circling back to Mrs. Bash, her mother is Mexican-American. Her grandparents on her father’s side survived the Holocaust. Her husband, John Bash, a U.S. Attorney, also felt compelled to defend his wife from these vicious conspiracy theories. So, to show how the Left disregards facts to push a narrative, they've smeared her as a half Mexican, Jewish woman that’s secretly a Nazi. I don’t give MSNBC credit much, but host Chris Hayes deserves some kudos for also trashing this narrative that’s running amok within his tribe.

Is this screencap of a hand gesture from a 30-year-old movie meant to serve as an argument that a Trump official didn’t intend it to be a racist dogwhistle when she did it today? Because that doesn’t follow if so. https://t.co/ACATV7mvn9

It’s meant to somewhat jokingly suggest that maybe “she’s throwing up a white power sign” is not the most likely explanation for her finger configuration.

That tweet was overly glib on a serious topic, so I took it down. Yes, it's used as an alt-right symbol. No, I do not think there is *any* evidence it was being "flashed" today in the hearing and I think people shouldn't disseminate that claim or insinuation. <fin>

The screenshot that was deleted was Eddie Murphy throwing up the same hand sign in the film Beverly Hills Cop. Still, good for Hayes—and as with anyone who veers away, he was torched by angry progressives. That’s how dumb these people are. The sign is not a white power symbol; even the Anti-Defamation League noted this. But if this is what allows them to sleep at night, then so be it. At the end of this fight, Brett Kavanaugh will be confirmed as the next associate justice of the Supreme Court. And just like 2016, they’re just going to have to deal with being losers.

If you think Zina Bash was flashing the "White Power" sign at the #KavanaughConfirmation, you're probably an... pic.twitter.com/bzRBaRNLkx

If you see something more than a piece of wood, you have fallen prey to the trolls. You've let them win.

They've succeeded in using the most innocuous and ordinary gestures, phrases and symbols to turn leftists into ludicrous paranoid conspiracy theorists. pic.twitter.com/veWEiQUT4N

Bash is the woman in the black dress in the featured photo above.