Oh Boy: Trump Administration Is About To Hammer Planned Parenthood 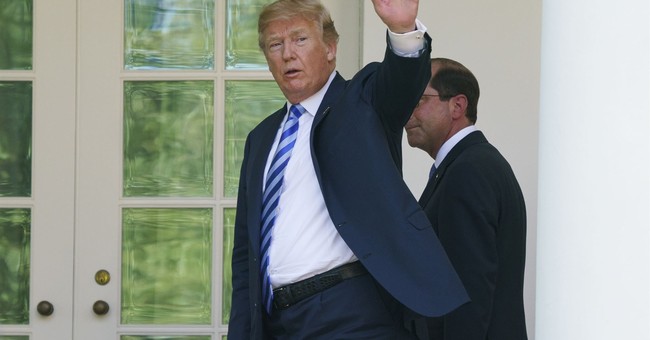 There were rumblings on Thursday that the Trump administration was considering cutting serious levels of funding to Planned Parenthood. While not a complete defunding of the pro-abortion organization, it would give the conservative base and the pro-life movement something to cheer: a massive budget cut. For years, Republicans have been promising to take on the ghouls running Planned Parenthood, who were forced into the public relations battle of their lives three years ago.

In 2015, David Daleiden’s Center for Medical Progress released a series of graphic videos that reportedly shows Planned Parenthood officials engaging in illegal trafficking of human body parts. Yes, the GOP budget, which passed through reconciliation on a 52-47 vote, gutted Planned Parenthood for a year and some parts of Obamacare, but it was vetoed by then-President Obama. Since then, there has been a lot of talk and no action. At the Conservative Political Action Conference in February, there was a side panel whose topic centered on whether the conservative movement was serious about defunding Planned Parenthood.

Today, the Trump White House will announce that they will be resurrecting an old Reagan order that barred federal dollars being used in programs where abortion is considered for family planning. There was a legal challenge to this order durngthe Reagan administration, which was upheld by the Supreme Court. Yet, it was short-lived since President Bill Clinton decided to scrap the regulation. The Weekly Standard has more on this:

On Friday, the Trump administration will announce a proposed rule to cut taxpayer funding to abortionists like Planned Parenthood under Title X, a program that provides $260 million annually in federal funding for contraception and other “family planning” initiatives.

“The proposal would require a bright line of physical as well as financial separation between Title X programs and any program (or facility) where abortion is performed, supported, or referred for as a method of family planning,” a Trump administration official tells THE WEEKLY STANDARD in an email.

The 1970 law establishing Title X states: “None of the funds appropriated under this title shall be used in programs where abortion is a method of family planning.” But in the 1970s and 1980s, the law was interpreted to allow Title X programs to refer patients for abortions, be co-located with abortion clinics, and lobby for pro-abortion policies—so long as federal dollars did not directly fund abortions. In 1988, President Reagan's secretary of Health and Human Services issued regulations to end these practices that blurred the line between funding contraception and promoting abortion.

The 1988 Reagan regulation was immediately challenged in court and never enforced, but it was upheld by the Supreme Court in a 5-4 decision in the case Rust v. Sullivan. By the time abortionists might have actually lost their Title X funds, however, Bill Clinton took office and killed the Reagan regulation, a policy that has remained in effect to this day. This anti-abortion regulation wasn’t reinstated by the George W. Bush administration.

“Unlike the Reagan regulation, the proposal will not prohibit counseling for clients about abortion, but neither will it include the current, potentially illegal mandate that projects must counsel and refer for abortion,” a Trump administration official tells TWS. “This proposal does not necessarily defund Planned Parenthood, as long as they’re willing to disentangle taxpayer funds from abortion as a method of family planning, which is required by the Title X law. Any grantees that perform, support, or refer for abortion have a choice – disentangle themselves from abortion or fund their activities with privately raised funds.”

President Trump and Republicans pushed through tax reform, which has yielded immense benefits for the country. Scores of companies are benefitting from the legislation, along with millions of working families. Bonuses averaging $1,000 (though some companies are handing out some as high as $3,000) are being doled out as well. The positive news from this bill is endless, which is why Democrats, especially red state Democrats, made a huge gamble universally opposing the bill last December. Yet, something else was needed to energize the GOP base. The border wall would have done it, a full funding of the project would have probably sealed the deal, but Democrats torpedoed any hope of an immigration deal with their government shutdown antics. Also, their rejection of border wall funding in exchange for 1.8 million illegals becoming legalized marked the time of legislative death for any immigration push right now. It could be resurrected sometime in the future. So, with this regulation, conservatives get another reason to turn out to vote in November, along with the added bonus that this is the right thing to do (via NYT):

Clinics that provide abortions or refer patients to places that do would lose federal funding under a new Trump administration rule that takes direct aim at Planned Parenthood, according to three administration officials.

The rule, which is to be announced Friday, is a top priority of social conservatives and is the latest move by President Trump to impose curbs on abortion rights, in this case by withholding money from any facility or program that promotes abortion or refers patients to a caregiver that will provide one.

The policy would be a return to one instituted in 1988 by President Ronald Reagan that required abortion services to have a “physical separation” and “separate personnel” from other family planning activities. That policy is often described as a domestic gag rule because it barred caregivers at facilities that received family planning funds from providing any information to patients about an abortion or where to receive one.

Marjorie Dannenfelser, the president of the Susan B. Anthony List, a group that opposes abortion rights, thanked Mr. Trump on Thursday night in a statement in which she said the move would “energize” conservative voters heading into the midterm congressional elections this fall.

“We thank President Trump for taking action to disentangle taxpayers from the abortion business,” Ms. Dannenfelser said. She said that Mr. Trump “has shown decisive leadership, delivering on a key promise to pro-life voters who worked so hard to elect him.”

The Trump administration passed tax reform, they’ve pledged to protect Second Amendment rights, and the lives of the unborn. Tell me how this isn’t conservative. Tell me why Republicans should abandon him again? He’s giving us most of what we wanted, though some on the Right still feel the need to try and undermine the president, bash him for being not conservative, or something. Yes, he’s a right-leaning populist—but I’m sure like what I’m seeing from the president.