Rock Bottom: Texas Democrats Have No Candidate For Governor 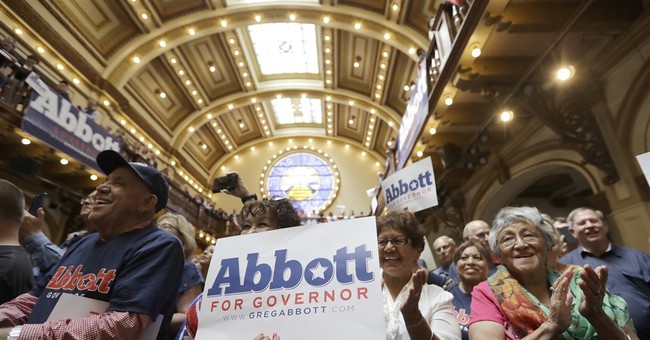 Well, while Democrats may jump for glee about President Trump’s approval ratings, two things they should know a) they could rebound enough for the GOP to comfortably retain their majority in congress; and b) it really doesn’t matter if the political climate is favorable to you if you have zero candidates to run in those elections. Yes, we’ve all heard the stories about thousands of candidates having interest to run as Democrats next year. How many of them are good, solid candidates? If all they can do is scream “I’m against Trump,” the GOP is going to win—again. The jury is still out, though the Democratic Party seems to heading for a collision course with their geographic wall. In Texas, that’s not even a debate because the Democrats have no one to run against Gov. Greg Abbott next year. Former HUD Secretary Julian Castro is also taking a pass. Meanwhile, Abbott is entering campaign mode, with millions in the war chest. His only threat is if Lt. Gov. Dan Patrick mounts a primary challenge (via Associated Press):

Democrats haven’t won a Texas governor’s race in nearly three decades, but a booming Hispanic population and the party’s dominance of the state’s largest cities have made them willing to invest in the contest to keep hopes of an eventual resurgence alive.

After high-profile candidates lost decisively in the last two elections, though, the party now finds itself in unprecedented territory for the 2018 ballot: with no major candidate to run.

Democratic leaders haven’t yet lined up a substantial name to represent the party and its message despite months of trying. Any continued faith in a Democratic turnaround in Texas is now colliding with pessimism that it will happen anytime soon.

“If they didn’t have somebody running for governor it’d be a symbol that they’ve given up,” said Brandon Rottinghaus, a political science professor at the University of Houston.

And the lack of a serious 2018 candidate, following the dismal showing of the Democrats in the 2010 and 2014 governor’s races, could make it harder to capitalize later if the political climate improves, as the party expects.

“You run the risk of looking irrelevant,” Rottinghaus said.

Abbott, meanwhile, has already begun campaigning for re-election with nearly $41 million in campaign cash and strong approval ratings. A scarier prospect for him than any Democrat could be a primary challenge from Republican Lt. Gov. Dan Patrick, a former conservative talk radio host beloved by grassroots activists. Patrick says he’s not running but some conservatives aren’t convinced.

Democratic hopes for something of a state-based comeback drowned with Wendy Davis, who couldn’t break 40 percent of the vote in 2014. They haven’t won a statewide office since 1994. The AP quoted Ms. Davis, who said, “Texas is not a red state. It is a nonvoting blue state.” Well, that would make it a red state, ma’am. Davis was speaking about the high concentrations of Hispanic voters in the state. Also, if Democrats want to keep losing statewide races, take advice from Wendy Davis.