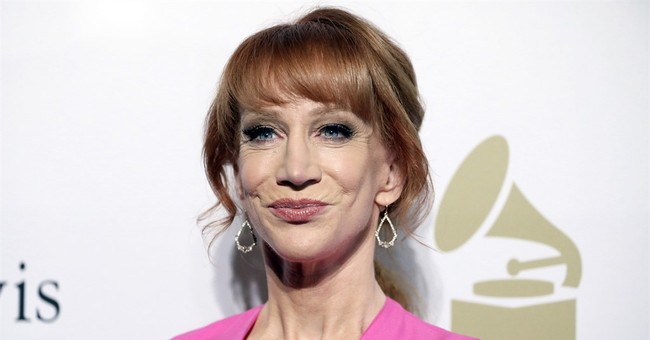 Christine covered the horrific and wholly inappropriate photo-shoot comedian Kathy Griffin did yesterday, showing her holding a bloodied head of Donald Trump. Griffin's photo caption aimed to highlight the remarks the president threw at former Fox News anchor Megyn Kelly after the first presidential debate, but that was in August of 2015. She said she was mocking the “mocker in chief.” It drew condemnation from across the political spectrum. Even Chelsea Clinton and Keith Olbermann—yes, Keith Olbermann—thought it was way over the line. It also caught the attention of the Secret Service. Griffin later apologized, took the photos down, said she would ask the photographer to remove them as well, and asked for forgiveness.

Griffin is known for her co-hosting duties on CNN’s New Year’s Eve programming. Well, the network decided to cut her off from that gig. When it comes to mock beheadings of presidents, there's strong bipartisan agreement that it's a very, very bad. It's sort of sad that it's come to this regarding discourse, but CNN's move is warranted. Also, as Guy mentioned, the apology would have been better if she addressed directly President Trump and members of the First Family.

CNN has terminated our agreement with Kathy Griffin to appear on our New Year's Eve program.

Her apology should have also been explicitly directed to POTUS & his family. https://t.co/ZyiEiPJLnB