Liberals: Sanctuary Cities Allow Illegal Immigrants To Report Crimes. Sheriffs: What Are You Talking About? 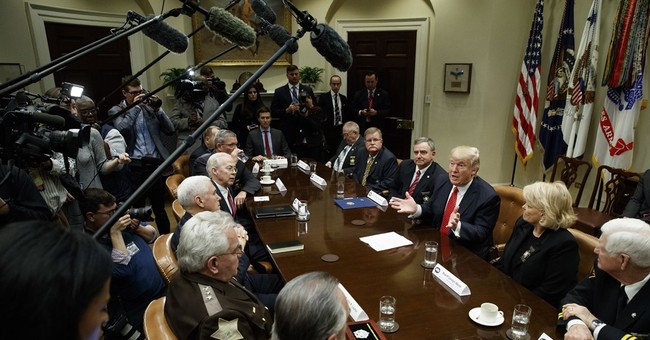 Liberals have long claimed that sanctuary cities are a law and order mechanism aimed at allowing those here illegally to report crimes without fear of deportation. It’s absolutely ridiculous. Nancy Pelosi reiterated that point in a CNN town hall event. Mayor Bill de Blasio reiterated this point to Jake Tapper and added that when illegals are caught drunk driving, they’re not deported as long as it doesn’t “lead to any other negative outcome.” Whatever that means.

Sheriffs from across the country met with President Trump last week and told The Washington Examiner that not only is the liberal talking point about sanctuary cities wrong—there’s not even anecdotal evidence to back it up:

National Sheriffs' Association executive director Jonathan Thompson, who represents a wide geographical range of law enforcement officers, said he has never seen any statistics indicating that illegal immigrants are a significant source of information for police.

"I've not even seen anecdotal evidence," Thompson told the Washington Examiner. "The sad thing is that [the Democratic claim] suggests that people here are aware of criminal activity and are not reporting it. We have to give them specific dispensation so that they're reporting crimes? ... I find the irony thicker than anything I can cut with a knife, that somebody here illegally is going to report a crime."

Sheriff Chuck Jenkins of Frederick County, Md., who was called last April to testify in a House of Representatives hearing on the effectiveness of immigration policies, said he's heard the Democratic argument many times over the years. Jenkins, in his 12th year as mayor in Maryland's largest county, said he doesn't buy it because his experiences on the job point to a different reality.

"I believe the illegal alien community is smart enough to know that there are protections in place that if they are victims, not to put them into removal custody," Jenkins said. "They can request a U-visa — basically gives them asylum from any deportation or removal."

Jenkins added that most jurisdictions do not actively try to identify the immigration status of someone who comes forward, "so the whole argument doesn't really make sense."

So, there’s another shoddy liberal talking point you can throw in the garbage. Frankly, arguments that support law enforcement being barred from enforcing federal immigration protocols are ridiculous. We shield people who have broken the law to come here illegally so they can report crimes. That’s rich.

Also, Mothers Against Drunk Driving ripped the mayor over his remarks—and rightfully so.