Friendly Reminder: None of Obama’s Gun Control Initiatives Would Have Prevented Charleston Shooting 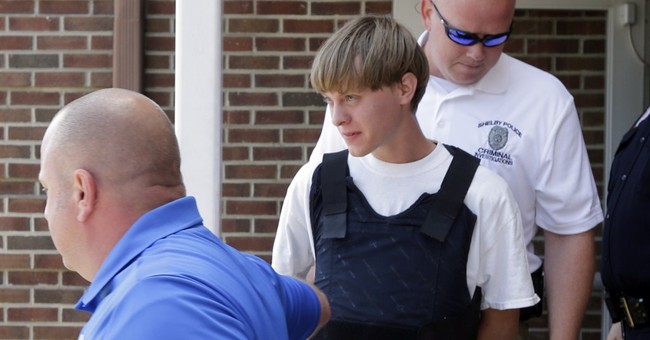 UPDATE: CNN reports that the shooter, Dylann Roof, bought his .45 caliber handgun in April. Over at National Review, Charles Cooke wonders how Roof was able to pass the background check. Officials are reporting that Roof intended to start a "race war" with his horrific act of violence, which means this incident could be described as an act of domestic terrorism. Here's the FBI's definition of domestic terrorism:

Involve acts dangerous to human life that violate federal or state law; Appear intended (i) to intimidate or coerce a civilian population; (ii) to influence the policy of a government by intimidation or coercion; or (iii) to affect the conduct of a government by mass destruction, assassination. or kidnapping; and Occur primarily within the territorial jurisdiction of the U.S.

Well, I thought we could at least wait until after the funerals of the nine victims of the horrific shooting in Charleston, South Carolina to discuss this issue, but the left wastes no time to take a swipe at the Second Amendment. As Dan wrote yesterday, President Obama addressed this awful tragedy in a press conference saying, “At some point, we, as a country, will have to reckon with the fact that this type of mass violence does not happen in other advanced countries. It doesn’t happen in other places with this kind of frequency. And it is in our power to do something about it.” Time noted that he called for a "reflection" on gun control.

First, let me be clear: nothing that the president had proposed in his renewed gun control push after the Newtown shooting in December of 2012 would have stopped 21-year-old Dylann Roof from unleashing this horrific torrent of violence upon the members of Mother Emanuel Church (via NRO’s Charles Cooke):

Back in 2013, when the country was still reeling from the abomination at Sandy Hook, President Obama hoped to achieve three things: 1) He hoped to ban so-called “assault weapons”; 2) he hoped to limit the size of commercially available magazines; and 3) he hoped to force all the states to require background checks when a firearm is privately transferred. Because the killer used a pistol with a regular magazine, the first two of these proposals are irrelevant here. Per Reuters, the shooter’s “father gave him a .45-caliber pistol for his birthday this year.” That pistol would not have fallen under any of the “assault weapons” bans that were proposed by Obama and his allies in Congress. Moreover, magazine capacity does not seem to have been an issue. The New York Times reports that the shooter took his time, stopping to talk and “[reloading] five times.” Had he been limited by law to ten rounds per magazine — as Dianne Feinstein would have liked — he would have been in no worse a position. (Most .45s come with magazines that hold seven, eight, or nine rounds.)

Indeed, even if we presume that the problem was that the killer wasn’t picked up by the system (it wasn’t), Obama’s much-vaunted “universal background check” proposal would not have applied here, either. “Toomey-Manchin,” the failed bill that contained the measure, explicitly exempted all transfers between family members and close friends — not, you will note, because it contained a “loophole” or a “typo” or an “oversight,” but because such exemptions were deemed to be “common sense.” I’m sorry to be a killjoy, but the truth is the truth: Had the Democratic laundry list of 2013 been implemented in its entirety, what happened this morning would have gone down in exactly the same way.

(For the record, the story is similar at the state level, too. In the handful of jurisdictions that have implemented their own universal background-check systems, family transfers are usually excluded from regulation. Had the killer been operating in California, Colorado, Oregon, Pennsylvania, Washington, New York, Iowa, Nebraska, or Delaware — or, for that matter, in 35+ other states — he would have been exempted from the rules. Had he lived in Rhode Island, Maryland, Connecticut, or New Jersey, he would not. And that’s before we even get to the questions of a) whether he’d have been picked up by such a check, and b) whether he’d have simply got a gun from somewhere else.)

Cooke added that Roof was already ineligible to own a firearm since he was out on bond in connection to a drug charge. The law is quite explicit in that “persons awaiting trial on felony charges are prohibited from receiving firearms.” As a result, Roof’s father could face up to ten years in prison for giving his son a firearm; he knew he wasn’t supposed to own one. Moreover, without a concealed carry permit and entering a church without “expressed permission,” Cooke added that Roof also broke the state’s transport and concealed carry statutes.

As you can see, there were a ton of laws broken, besides the multiple counts of murder Roof will face. Theoretically, these laws would have prevented a mass shooting, but criminals do not abide by these social mechanisms that are aimed to maintain order. In Connecticut, Adam Lanza tried to purchase a rifle at a local gun store (he could not buy a handgun since he was under the age of 21), but was unwilling to participate in the 14-day background check, so he decided to murder his mother and take her guns to inflict the unspeakable violence at Sandy Hook Elementary School.

There’s no need to add to preexisting gun control laws. What Roof’s father did was a felony. One could argue that Lanza’s mother probably shouldn’t have had firearms in her home given her son’s mental state. I’ll let you debate that amongst yourselves.

Second, these horrific mass shootings occur in other “advanced countries.” Have we forgotten Charlie Hebdo already?

In 2011, a deranged Anders Behring Breivik killed eight people by setting off a van bomb in Oslo, before going on to murder 69 more people, mostly children, at a summer camp. This is the single worst shooting spree incident in history. Obama surely remembers that he left the White House and visited the Norwegian ambassador’s residence to offer his condolences.

It takes only a rudimentary search to find out that mentally unstable killers can be found anywhere. In February of this year, nine people were killed in Czech Republic spree killing.

In Erfurt, Germany, a couple of years ago, an expelled student murdered 13 teachers, 2 students and a policeman. That same year, in the Serbian village of Velika Ivanca, a gunman shot and killed 14 people—many of them his own relatives— and a Russia gunman opened fire with a semi-automatic rifle killing six people. A couple of years before that, in England, a lone gunman killed 12 people and injured 11.

Advanced countries or developing ones, it’s the same thing. In 2013 a mentally unstable man in Rio de Janeiro killed 12 children and seriously wounded another 12.

And you might remember that China had an outbreak of mass stabbings, hammer and cleaver attacks not long ago. You don’t need guns to kill people. One man stabbed 22 children by himself. Two attackers killed 29 people and injured 143 at Chinese railway station last year.

Third, let’s not get all wrapped up in the false narrative that we have a gun violence epidemic; we don’t. Overall, violent crime is continuing to drop:

Between 1993-2011 gun-related homicides have dropped 39 percent since 1993; Pew Research has a higher figure, claiming a 49 percent drop in gun homicides in virtually the same time frame.

Lastly, let’s look at where these mass shootings occur. In April of 2014, John Lott of the Crime Prevention Research Center released a study where he found that since 1950, all but two multiple victim public shootings occurred in areas where firearms were banned. The left-leaning publication Mother Jones analyzed 62 mass shootings in the past 30 years. They had an interesting conclusion: 80 percent of the perpetrators exhibited symptoms of mental illness, including delusions, acute paranoia, and depression. The headline read “maybe what we need is a better mental-health policy.” BINGO!

In the Charleston case, we don’t know about the mental state of Dylann Roof. He obviously has racial problems, as he’s been photographed wearing a jacked with the Apartheid-era South African flag–and the flag of Rhodesia (modern day Zimbabwe). He was also reportedly a heavy drug user. As he opened fire into the church, a survivor recounted Roof saying, “I have to do it. You’re raping our women and taking over the country. You have to go.” Roof’s roommate says he’s been planning something like this for months (via Daily Beast):

Roommate Dalton Tyler told ABC News that Roof was “planning something like that for six months.”

“He was big into segregation and other stuff,” Tyler said. “He said he wanted to start a civil war. He said he was going to do something like that and then kill himself.”

Does this sound like a sane and rational human being to you? We shall find out more about this disturbed individual, and I’m pretty sure it isn’t going to be pleasant.

For now, the old talking points of the anti-gun left will be resurrected, but the facts are that violent crime is down, gun homicides are down, mass killings happen all over the world, and we’re not suffering under a gun violence epidemic.