Despite TSA's Serial Failures, 43 Percent Are Confident They Can Stop Terrorists At Airports 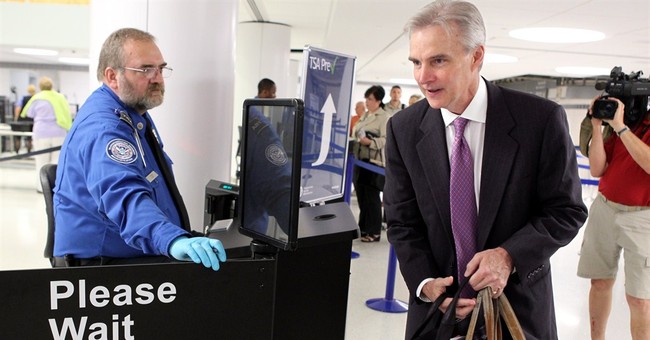 The Transportation Security Administration is undergoing a public relations nightmare that is probably just as bad, if not worse, than the serial failures that occur on Washington D.C’s metro rail system. The top-notch inept legions of agents that TSA employs to keep us safe to give the veneer of safety upon checking into our respective flights have been accused of sexual assault in airports across the country; they missed fake bombs and weapons carried by test subjects posing as terrorists; and they failed to flag 73 airport workers with “ties to terrorism.” So, should we be surprised that only five percent of Americans are very confident that TSA executes their duties properly? You know, that whole catching terrorists before they board the plane bit. Yet, if you look combine the confident vs. not confident camps regarding the TSA catching terrorists, the country is virtually split down the middle regarding this dysfunctional agency. Also, while people may not like the long lines–and the latex gloves (advanced screenings)–Americans generally think they’re still necessary (via YouGov):

Confidence in the TSA is much lower than for other groups involved in air safety. By comparison, 40% of Americans have a 'great deal' of confidence in air traffic controllers. Even the Federal Aviation Administration (FAA), another government agency, is much better regarded with only 23% saying that they are 'not too' or 'not at all' confident in the FAA while 28% have a 'great deal' of confidence.

Additionally, only 12% of air travellers think TSA screening procedures are "extremely" or even "very" effective. Meanwhile over a third (36%) think the screenings are not too effective or not effective at all.

While most Americans (58%) think that airport screenings are necessary, 27% say that they are overly intrusive and don't do much to keep air travel safe. There is something of a partisan divide on the issue, as Republicans (33%) are almost twice as likely as Democrats (18%) to say that airport screenings are overly intrusive and not particularly effective.

Hence why the confidence gauge was somewhat split, with 43 percent of Americans having some degree of confidence that the TSA would be able to stop a terrorist boarding a plane, while 45 percent disagree; 12 percent were not sure. Also, 66 percent said they have followed the foul-ups at TSA in some fashion, while 34 percent said they weren’t following the story at all.

One could argue that the 22 percent who don’t fly might have erred on the side of the government since the appearance of some authority making sure bad guys don’t fly might be comforting. At the same time, even those who don’t fly should be able to access the numerous stories pointing to TSA ineptitude. As for the five percent who have high confidence in the TSA in stopping terrorists, that figure might be representative of the families of fellow agents. Some commentators joke that Congress’ 16 percent approval rating comes from the families of staffers and politicians.

Regardless, YouGov ended their findings that airport security has serious problems, some so great that we might have to start over on everything.