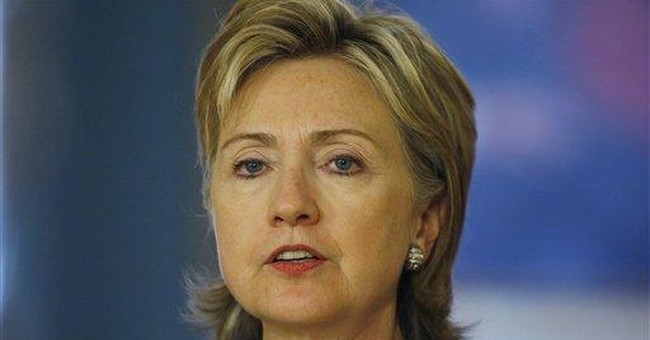 Okay. Let’s recap. In March, we discover that Hillary Clinton had a private email system she used to conduct all of her business when she was Secretary of State. It appears to have been a blatant attempt to circumvent FOIA requests. Nevertheless, she turned over 55,000 pages of emails she deemed were related to her work at State, then deleted nearly 32,000 emails she said were personal. She also wiped the server clean, rendering a third party review totally pointless. Then, we found out from the State Department’s Inspector General that its staff at the department isn’t properly preserving emails. Moreover, Hillary’s emails, which are suppose to be preserved for the public record, were not–and only recently did the State Department begin routinely archiving email correspondences with senior officials.

Now, we have news that State Department staffers sometimes blocked documents requested by FOIA from being released, and sources close to the process said that public records law expert were brought into a meeting to discuss how to “shield documents from disclosure.” The documents related to the Keystone pipeline project in this successful FOIA request, released emails between an official at our Ottawa embassy and a Canadian lobbyist for the project; an environmental group submitted the request. Clinton has been tight-lipped about her position on Keystone, much to the chagrin of green groups. Nevertheless, the release of these documents prompted Hillary’s Chief of Staff at the time–and board member of the Clinton Foundation–to allegedly quarterback the review process for ALL Keystone-related materials that were set to be disclosed. Also, some FOIA interference was reportedly run regarding former President Clinton's speaking engagements. When Mrs. Clinton was Secretary of State, the former president said he would submit his paid speech proposals to state for review (via WSJ):

When Hillary Clinton was secretary of state, her staff scrutinized politically sensitive documents requested under public-records law and sometimes blocked their release, according to people with direct knowledge of the activities.

In one instance, her chief of staff, Cheryl Mills, told State Department records specialists she wanted to see all documents requested on the controversial Keystone XL pipeline, and later demanded that some be held back.

In another case, Ms. Mills’s staff negotiated with the records specialists over the release of documents about former President Bill Clinton’s speaking engagements—also holding some back.

The Clinton political staff’s scrutiny of Keystone documents arose after a document request that succeeded. In it, the environmental group Friends of the Earth obtained emails that were sent to Paul Elliott, a lobbyist for the company seeking to build the pipeline, by an official of the U.S. embassy in Ottawa—which is part of the State Department.

In a blog post, Friends of the Earth called the email a “smoking gun” showing “definitive evidence of bias.” A State Department spokeswoman said at the time that the emails weren’t evidence of any bias.

After the episode, Ms. Mills insisted on reviewing all Keystone-related documents being prepared for release, and flagged as problematic a few that the department’s records-law specialists felt obligated to release, said the person with knowledge of the situation.

The Keystone documents Ms. Mills objected to were all either held back or redacted, the same person said. After Ms. Mills began scrutinizing documents, the State Department’s disclosure of records related to Keystone fell off sharply, documents that include a court filing show.

Two others with knowledge of State Department records procedures said political appointees were allowed greater say than the FOIA experts thought was appropriate. It was hard to push back against the political staff, one said.

The pipeline project was so sensitive that an expert on FOIA was invited to a State Department policy meeting to advise on how to prospectively shield documents from disclosure, such as by marking them as involving the “deliberative process,” said a person who attended.

Mr. Clinton had agreed, when his wife became secretary of state, to submit proposals for his paid speeches to the department for review. Some document requests related to the reviews. On this matter, too, Ms. Mills’s office sometimes objected to the release of records FOIA specialists thought ought to be handed over, this fourth person said.

Asked who had final say, the person said, “We negotiated it out,” and some documents were withheld or redacted.

Experts on FOIA said it might be acceptable for records reviewers to seek the views of political appointees, but there should be no negotiation. “Ultimately, the career people have to be the ones who make the final call,” said Miriam Nisbet, who recently retired as director of the federal FOIA ombudsman office at the National Archives and Records Administration.

On Tuesday, a federal judge said that the 55,000 pages of emails Clinton turned over must be released on a “rolling basis.” The Republican National Committee is seeking to know more about this alleged FOIA stonewalling from staffers to Mrs. Clinton when she served as out top diplomat (via McClatchy):

In a letter to the department obtained by McClatchy, the Republican National Committee, asks for all records, including memos and correspondence, that mention, reference or relate to FOIAs, including the requests themselves that were sent to or from 41 employees, including Clinton and many of her top aides, including chief of staff, Cheryl Mills.

Also, Hillary's private email use was probably open to hacking from foreign sources,according to security experts.  Oh, and of course, the State Department isn't commenting on the reported FOIA meddling conducted by Ms. Mills at State at this time.