Wait, Government Spent How Much On Those Awful TSA Naked Body Scanners? 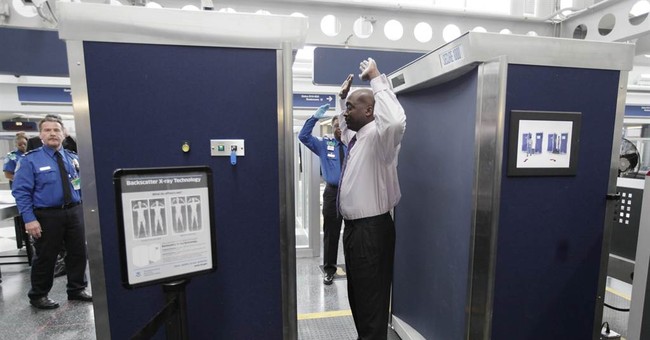 Earlier this month, Jaie Avila of News4 San Antonio discovered that those full body scanners that were scrapped by TSA over privacy concerns in 2013 are being sold for a little as ten dollars, whereas the government spent $40 million, meaning a huge loss for taxpayers. To make matters worse, some scanners are brand new. They’re still in their original packaging (via News4):

The Transportation Security Administration (TSA) paid $160,000 a piece for them, but we found them being auctioned off in San Antonio for as little as ten bucks.

Local government agencies can bid on surplus equipment the federal government no longer wants. Most of the stuff is old; furniture and computers, border patrol flashlights and other items the government got years of use out of. But in the middle of the warehouse, still sitting in the original boxes, we found six full-body airport scanners that have never been used.

“These are basically brand new,” said a warehouse employee.

But what does he mean by “basically?”

“They bought them and were going to use them, but never did,” he explained.

The TSA confirms the six we found are part of a larger group of 250 scanners YOU paid $40 million for, and is now trying to get rid of. About a third were never even used in airports. The ones that were used to screen passengers were taken out of service after about two years.

“Most taxpayers are not going to expect the government to be throwing away essentially $160,000 scanners - 40 million dollars’ worth of body scanners,” said Leslie Paige from Citizens Against Government Waste.

So why did TSA stop using the scanners?

It goes back to that controversy in 2010 when they were first unveiled. Congress agreed with passengers that the x-ray images the scanners showed of travelers were too graphic. So in 2012 it passed a law requiring new software that would reduce the resolution on the scanner displays.

But the company that made these scanners, Rapiscan, was unable to modify the software, so TSA scrapped all 250 and had to pay even more taxpayer money to replace them.

The Group Citizens Against Government Waste says TSA should have demanded a refund, or setup a pilot program before paying for the scanners.

“When you go out to procure $40 million dollars of equipment, it seems to me you would have gone out and done a little demonstration project. Tested the equipment. You might have put them in at a couple of airports. Tried it out first to see if it was going to cause a problem,” said Paige.

Oh, by the way, you’re really not being paranoid about TSA agents laughing at your anatomy; it allegedly happens in the coffee room, despite TSA statements to the contrary. The TSA cited the inability for the storage of images–and assured the public that images are deleted immediately after a scan (via Fox News, Jan. 2013):

When they were first introduced, the full-body scanners triggered fears that TSA workers might preserve the nude images they produce. But the agency insisted that images from the so-called "backscatter" machines "cannot be stored, transmitted or printed, and is deleted immediately once viewed. In fact, the machines have zero storage capability and there is a privacy filter applied to blur all images."

But last month, an anonymous blogger who claims to be a former TSA agent answered a reader's e-mail asking "What really happens in the TSA screening room?" Critics said the answer proved them right.

"Personally, in the I.O. room, I witnessed light sexual play among officers, a lot of e-cigarette vaping, and a whole lot of officers laughing and clowning in regard to some of your nude images, dear passengers," the blogger wrote in a post that was widely circulated throughout the media.

TSA officials sought to downplay the fervor created by the blog, with a spokesman saying, "We expect all TSA officers to conduct themselves in a professional manner. Where violations of professionalism occur, appropriate corrective action is taken."

Katie recently wrote about how the TSA has allegedly been engaging in sexual assaults across the country. It’s good to know we have  people in the TSA making sure everyone is properly screened before flying – said by no one