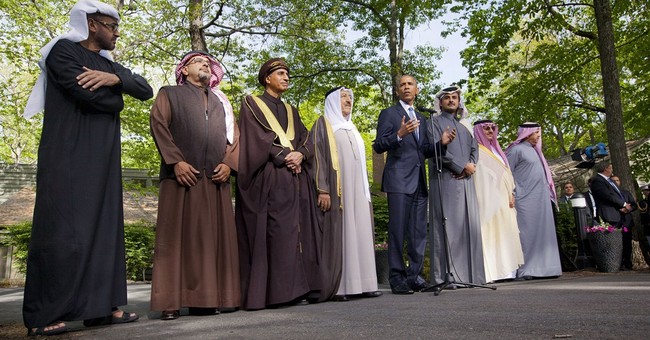 After a daylong meeting with the Gulf Cooperation Council at Camp David, President Obama assured that the United States will stand with our allies in the region, who are nervous about the rising influence in Tehran. Yet, according to the New York Times, the president stopped short of offering a formal defense pact, something the Saudi delegation was hoping for during these discussions. Secretary of State John Kerry and Energy Secretary Ernest J. Moniz, the principal U.S. actors in the Iranian negotiations, also gave a detailed briefing on the state of the negotiations. Oh, and to show how close we are to Saudi Arabia, Obama botched the name of a Saudi king when highlighting the ties between out two countries:

President Obama on Thursday offered Saudi Arabia and smaller states in the Arab world new defenses against potential missile attacks and maritime and cyberthreats from Iran, an effort to allay their fears that a nuclear accord with Tehran will empower their main rival in the Middle East.

But in a daylong meeting here, Mr. Obama stopped short of offering a formal defense pact that would obligate the United States to come to the nations’ aid if they were attacked. Instead, he tried to reassure them that he was committed to their security and willing to help them counter Iran. The Saudis and other Arab nations in the Gulf Cooperation Council say that lifting oil and financial sanctions, as called for in the nuclear deal, will allow Iran to expand its influence from Iraq to Syria to Yemen.

Speaking to reporters after the meeting, Mr. Obama said that he had been “very explicit that the United States will stand by our G.C.C. partners against external attacks,” adding, “We want to make sure that this is not just a photo op but a concrete series of steps.”

In a series of meetings and at a working lunch on Thursday, Mr. Obama and members of his Cabinet — including Secretary of State John Kerry and Energy Secretary Ernest J. Moniz, the lead negotiators with Iran — gave the leaders and representatives of the council a detailed briefing about the status of the Iran nuclear negotiations that have caused so much concern in their nations.

The administration argued that the deal, if completed by June 30, would ultimately make them and the region safer by preventing Iran from being able to create a nuclear weapon in the next 10 to 15 years. After that, many of the restrictions on Iran would be lifted entirely, one of the main reasons Arab leaders have objected to the deal.

But even before the meeting started at Camp David, it had fallen short of the expectations of allies like Saudi Arabia, which had sought a formal treaty outlining new United States defense commitments; American officials said no such commitments would materialize.

And for all the expected talk of close ties and historical alliances, at the White House on Wednesday, Mr. Obama named the wrong Saudi king as he invoked the long tradition of friendship between Washington and Riyadh.

“The United States and Saudi Arabia have an extraordinary friendship and relationship that dates back to Franklin Roosevelt and King Faisal,” Mr. Obama said in the Oval Office meeting on Wednesday.

King Faisal bin Abdul Aziz ruled from 1964 to 1975, when he was assassinated. Roosevelt died in 1945. Mr. Obama almost certainly meant to refer to King Abdul Aziz bin Saud, Faisal’s father, who famously met with the American president after the Yalta conference in February 1945, just months before Roosevelt’s death.

The Times mentioned something that’s been on the minds on many Middle East policy wonks, which are the Saudi Arabia’s nuclear goals. The Kingdom has already stated that it will begin its own nuclear weapons program if Iran gets the bomb. Turkey and Egypt have made similar statements. It’s a nuclear arms race with Al-Qaeda and ISIS in the neighborhood; that’s insane.

It seems as if the King of Bahrain, King Hamad bin Isa AlKhalifa, decided to skip the meeting for a horse show with Queen Elizabeth II.

Oman, Qatar, and the United Arab Emirates make up the remaining members of the G.C.C.

#BREAKING Obama says goal is not to 'marginalize Iran'