Tragically, We Are Reminded (Again) That Police Work Is Dangerous 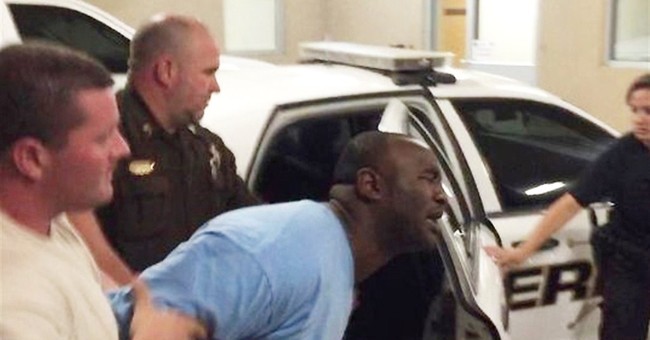 Authorities confirmed Sunday that a fourth suspect has been arrested in connection with the fatal Saturday night shooting of two Hattiesburg police officers.

Last night, Hattiesburg, Mississippi was rocked by the shooting deaths of two police officers during a routine traffic stop. At the time, the names of the officers were withheld. Now, we know that Officers Benjamin Deen, 34, and Liquori Tate, 25, are the officers who lost their lives in the line of duty. CBS News reported that there hasn't been a police fatality in the city for three decades until last night. A manhunt ensued, resulting in the arrests of three people, brothers Marvin and Curtis Banks and Joanie Calloway. Two of which have been charged with capital murder, while the third suspect being charged as being an accessory after the fact:

Warren Strain, a spokesman for the Mississippi Department of Public Safety, said the three suspects were traveling in a Hyundai vehicle when it was stopped by one officer and that shots were fired by "one individual" from the vehicle.

CDT Saturday, a second officer arrived to help him and shots were fired. Those were reported to be the first deaths on the Hattiesburg police force in three decades.

Strain told The Associated Press by phone early Sunday that the shooting occurred near an area of apartment houses and that officers told people immediately afterward to take shelter while they searched for two suspects.

Strain said both officers died of their injuries at a hospital.

"At this point a weapon has not been recovered. However, warrants have been issued to search several properties in the Hattiesburg area. We are hopeful and believe that the murder weapon will be recovered," Strain added. "At this point, it appears to have been only one weapon."

We don’t know why the suspects’ car was stopped, but this shooting comes after the NYPD laid Officer Brian Moore, 25, to rest on Friday after succumbing to injuries he sustained on the job. Demetrius Blackwell, 35, shot Moore in the head when Officer Moore and his partner approached Blackwell on suspicion of having a firearm. Again, we are reminded that the police have an extraordinarily hard job regarding protecting our respective communities.

The Clarion-Ledger reported on the two eyewitnesses who came to the aid of the downed officers moments after the shooting. It’s quite harrowing [emphasis mine]:

Hattiesburg residents Tamika Mills and Pearnell Roberts discovered the two officers who had been shot. The pair got out to check on the officers and called 9-1-1.

"Never in my life have I experienced or seen anything like this except on TV, and to be in the midst of it, it's shocking and heartbreaking," Mills said. "As we were coming down Fourth Street, we noticed a bunch of lights. As we came on through, (Roberts) told me to turn around because she saw somebody laying on the ground.

"So I backed up. That's when we noticed the officer was down. We just saw that one, but in the course of me being on the phone with 9-1-1, I turned and I saw another officer across the street rolling on the ground. (Roberts) ran across the street to check on him. He wasn't all the way alert but he asked her, 'Am I dying? I know I'm dying. Just hand me my walkie-talkie.'"

There is no doubt that in some communities, police relations are poor. In Ferguson, there are systemic problems with the police department. That being said, the shooting death of Michael Brown is an entirely separate issue; former Officer Darren Wilson shot brown in self-defense. In Baltimore, a city known for improper arrests, the Department of Justice is conducting a civil rights investigation at the request of Mayor Stephanie Rawlings-Blake. The city briefly descended into chaos last week due to protests over the death of Freddie Gray. Now, in San Francisco, 3,000 arrests made by 14 officers will be reviewed after it was revealed they sent racist and anti-gay texts.

Certainly there are issues among those in the policing community, but the vast majority of officers are good, hardworking people with a sense of duty, purpose, and selflessness to wear the badge in order protect our rights and safety. They also put their lives on the line for us as well. Moreover, killing officers due to a perceived notion of widespread bias and corruption is most certainly not okay. It’s an affront to civil society, and we can only hope that justice will be done to the murderers of Officers Brian Moore, Benjamin Deen, Liquori Tate, and any future would-be cop killers.