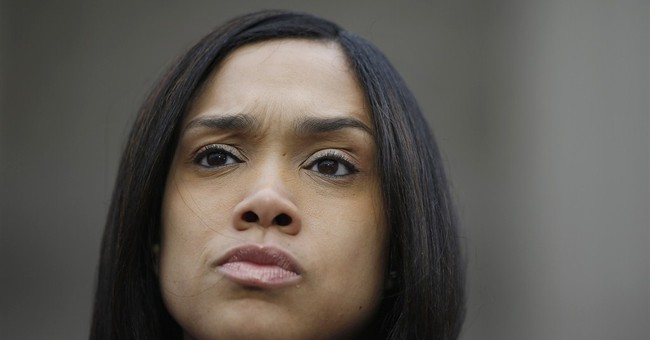 Baltimore City’s State Attorney Marilyn Mosby was dealing with questions about alleged conflict on interest issues when she brought charges against the six officers involved in the death of Freddie Gray that plunged the city into chaos. Now, the attorneys for those officers have this to say: recuse yourself (via CNN):

Attorneys for the six Baltimore police officers charged in the death of Freddie Gray want the case dismissed or State's Attorney Marilyn Mosby's office to be taken off the case.

A lengthy motion filed in Baltimore City District Court cites a variety of concerns, including conflicts of interest and questions about the office's independent investigation.

It spells out five conflicts of interest as reasons for the requests. The attorneys say in their court filing that:

-- She has personal relationships with potential witnesses;

-- Her office took a role investigating the case;

-- There is a pending civil lawsuit against her office;

-- An attorney for Gray's family is a close friend, supporter and a lawyer for Marilyn Mosby;

Gray was arrested April 12 for possessing an illegal knife and suffered a fatal spinal injury while being transported in a police van to a booking center, Mosby said.

The police investigation into Gray’s death also came to a different conclusion than that of Ms. Mosby, namely the second-degree murder charge. While manslaughter was a charged being considered, second-degree murder was not–and this development feeds the notion that Mosby’s office overreached.