Rubio Pollster: GOP Needs 40 Percent Of The Hispanic Vote To Win In 2016 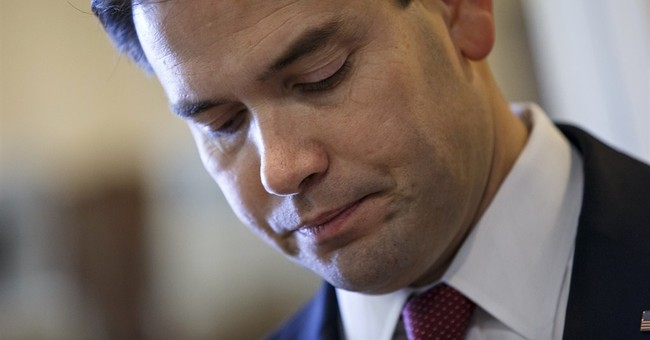 Whoa! That’s a high bar! A pollster who is set to work for Sen. Marco Rubio (R-FL) is surely laying some breadcrumbs for donors–and the media–by saying that the 2016 Republican nominee must win more than 40 percent of the Hispanic vote in order to win the election (via National Journal):

Whit Ayres, a prominent Republican pollster who will work for Sen. Marco Rubio's presidential campaign, says the party has to do much better much faster. Ayres told reporters Tuesday morning that the Republican nominee must capture more than 40 percent of the Latino vote in 2016 to win the presidency—and suggested that his candidate is uniquely positioned to do so.

"A Republican nominee is going to need to be somewhere in the mid-forties, or better, among Hispanic voters," Ayres said at a Christian Science Monitor breakfast. The pollster noted that his candidate is "extraordinarily talented" and could be "transformational" in expanding the GOP's appeal.

This adds more speculation over Rubio’s pending April 13 announcement in Miami, where many are assuming he will officially toss his hat into the 2016 ring.

Now, nabbing 40 percent or more of the Hispanic vote isn’t impossible. It’s been done before with George W. Bush in the 2004 presidential election. He clinched 44 percent of the vote and handily beat then-Sen. John Kerry. Yet, that number has seen a rapid decline. John McCain received 31 percent of the Hispanic vote in 2008, Mitt Romney went even lower with 27 percent in 2012.

In 2014, the GOP pretty much gaffe-proofed their candidates in key races, and Republicans won 37 percent of Hispanic voters (not too shabby), but also 51 percent of Asians and 48 percent of women voters. While some on the left said that off year elections have lower turnout rates and are more Republican, which is generally true, that wasn’t the case in 2014. As Real Clear Politics’ Sean Trende wrote [emphasis mine]:

The results are underwhelming: If the 2014 electorate had resembled the 2012 electorate in terms of race, the Republican vote share would shrink by just 1.97 percentage points. In other words, in a 2012 electorate, Republicans would have won the popular vote for the House by 4.5 points, rather than 6.5 points. That’s not nothing, as they say, but it still only explains a relatively small share of the difference between the 2012 and 2014 results. Put differently, if Obama had put up the same vote shares among racial groups in 2012 as Democrats ultimately did in 2014, he’d have lost.

On a side note, the swing these three groups had–especially with Asians–towards the GOP shows they’re not monolithic voting blocs; women, Hispanics, and Asians are movable. In the 2010 midterms, the GOP actually won the majority of women voters; Hispanic voters hung around 34 percent.

So, does the GOP need Hispanic voters to win? As I mentioned in a previous post, Republicans could be overstating the need of winning more Hispanic voters–theoretically (a disclaimer I should’ve added previously). The road to 270 isn’t impossible for Republicans without a surge in Hispanic support, but it’s certainly a more difficult one according to Nate Cohn of The New York Times. He said the problem rests in the fact that Hispanic voters mostly live in states that are just not competitive in national elections. Texas isn’t going blue in the foreseeable future, despite what liberals might say; it’s their unicorn. And Republicans aren’t going to make inroads in California, which has seen their share of GOP voters fall. Cohn added that the GOP must focus on winning more white voters in the North, coupled with Hispanic voters. And the one state they must carry–which also has a large share of eligible Hispanic voters–is Florida [emphasis mine]:

The Republicans have a path to the White House without Hispanic voters. It’s just a harder one.

[I]n 2016 Hispanics will represent just 12 percent of eligible voters, and between 9 and 10 percent of actual voters. That’s a lot, but it’s not large enough to grant or deny Republicans the presidency.

The math is simple: A 10-point gain among 10 percent of the electorate yields an additional point in the popular vote. Mr. Obama won by a 3.9-point margin in 2012. So even if the next Republican presidential candidate received the magical 40 percent of Hispanic voters that Mr. Bush received in 2004 — which seems unlikely in a fairly competitive national election — it still wouldn’t erase Mr. Romney’s deficit in the popular vote.

Hispanic voters are disproportionately concentrated in noncompetitive states like Texas and California. This makes it even harder for the Republicans to claim the presidency by focusing on them, since there are relatively few Hispanic voters in the battleground states that determine who wins the Electoral College. Hispanics represent more than 5 percent of eligible voters in just three battlegrounds: Florida, Nevada and Colorado. As a result, the Republicans could have entirely erased Mr. Obama’s advantage among Hispanic voters and still lost the presidency in 2012, since Mr. Romney would have still lost states like Virginia and Ohio, where there are very few Hispanic voters.

That situation turns on Florida. The Republicans don’t have an especially credible path to the presidency without Florida’s 29 electoral votes. The easiest alternative might be for Republicans to flip Virginia and Ohio, scale the so-called Blue Wall in Pennsylvania, and then pick up 12 additional electoral votes from some combination of Colorado, Iowa, Wisconsin and New Hampshire. The G.O.P. path to the presidency all but closes if the Democrats combine Florida and Pennsylvania.

Florida was the closest state of the 2012 presidential election, and Hispanics will most likely represent 19 percent of eligible voters in 2016, up from 17 percent in 2012.

Obama only won Florida by a razor thin margin (50/49.1). No doubt, Romney’s disastrous comments about self-deportation contributed to his loss there. In 2004, Hispanics broke for Bush with 56 percent of the vote; they were 15 percent of voters at the time. Romney was only able to nab 39 percent in 2012.

I’m not saying that Republicans shouldn’t be aggressive in their Hispanic outreach operations–they should. And they should have the same fervor with women, men, Asians, and every potential voter bloc that will participate in the 2016 elections. It’s incredibly important that we expand the tent of the party in order to survive. Yet, there seems to be this “do or die” attitude with the Hispanic voter bloc. Yes, they have growing influence–and they will play a larger role, along with Asians, in future elections. But they’re still not as influential–concerning shifts in voting (yet)–since the white vote still represents around 75 percent of the electorate in presidential years.

At a Brookings Institute event in 2013, Trende noted Republicans had three options to reach the proverbial “50 plus one” in the popular vote in 2012. They could have won 16 percent more of the black vote, 21 percent more of the Hispanic vote, or three percent more of the white vote. He explains the rest here; fewer whites voted in 2012 (72 percent) than in 2008 (74 percent), and that’s true when you go back to 2004 (77 percent). What happened to turnout?

You need to look where it was down for white voters; it was mostly the rust belt and a large amount of counties stretching in a diagonal direction from upstate New York to New Mexico, according to Trende. These were the areas where Ross Perot did well in the 1990s due to his economic populism. And the voters who live in these areas during the 2012 election thought Obama was too liberal, but didn’t see much that Romney could offer them either, so they stayed home. Trende added that both parties didn’t offer much to working class whites, though they have drifted far and away from Democrats in recent elections. This is due to the fact that these voters live in areas where Republicans dominate local politics. Yet, there are inroads both sides can make with this voting bloc that is more of a “do or die” moment for Democrats if they can’t win them back in some fashion.

In short, of course a Rubio pollster will sound the alarm bells about the Hispanic vote a few weeks before his employer announces his presidential run. But, if you look at the electorate–and where these voters live–it’s not a doomsday scenario. And it still hinges a lot on Republicans doing better with white voters, though they should gobble up as many Hispanic voters as they can next year if they want to make it a lot easier on themselves in winning the fight for the White House.