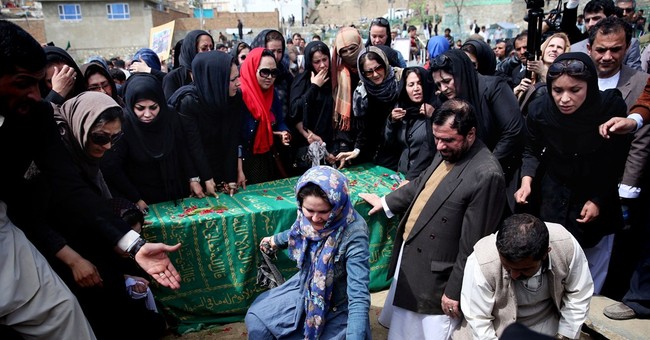 Last week, Caleb Howe at Truth Revolt posted a brutal video of an Afghan woman being beaten to death by an angry mob for allegedly desecrating the Koran.

“The crowd can be seen beating and kicking her, hitting her with sticks, and even dropping large bricks and blocks of stone on her. Her body was then burned, and thrown into a river,” he wrote.

The woman, Farkhunda,is known by only one name, and she was in her late 20s to early 30s. Some sites, like the AP, have her being 27 years old, while CBS News reported she was 32. Her family said she was suffering from mental illness.

After an investigation, it’s been confirmed that she was completely innocent for desecrating the Koran:

Hundreds of people gathered in the north of the capital for the funeral of 27-year-old Farkhunda, who like many Afghans is known by only one name.

She was killed late on Thursday by a mob of mostly men who beat her, set her body on fire and then threw it into the Kabul river, according to police accounts.

President Ashraf Ghani condemned Farkhunda’s killing as a “heinous attack”. The authorities are still investigating what prompted the mob assault.

Following allegations that police stood by and did nothing to stop the attack, Ghani said it revealed “a fundamental issue” – the country’s police were too focused on the fight against the Taliban insurgency to concentrate on community policing.

His comments followed widespread condemnation of the killing. In Afghanistan, despite constitutional guarantees of equality, women are generally treated as inferior and violence against them often goes unpunished.

Some Afghan officials and religious leaders sought to justify Farkhunda’s killing, alleging that she had burned a copy of the Qur’an.

But at her graveside, the head of the interior ministry’s criminal investigation directorate, Gen Mohammad Zahir, said no evidence had been found to support those allegations.

“We have reviewed all the evidence and have been unable to find any single iota of evidence to support claims that she had burned a Qur’an,” Zahir said. “She is completely innocent.”

The crowd was reportedly shouting anti-American and anti-democracy slogans as they stomped on her.