With Yemen Collapsing, U.S. Evacuates The Last Of Its Special Operations Forces 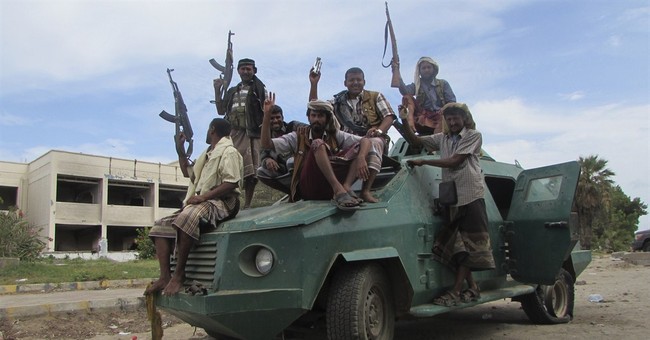 With Yemen crumbling, the United States will pull out the last of its Special Operations forces–about 100 total personnel–from Al Anad airbase. This comes after we closed our embassy in the capital of Sanaa after Shiite Houthi rebels took control of the city, which led to a power sharing deal with the then-government under President Abed Rabbo Mansour Hadi in January. Yet, this move prompted Hadi and his cabinet to resign en masse shortly thereafter:

The U.S. military is in the process of evacuating about 100 Special Operations forces members from the Al Anad airbase in Yemen due to that country's deteriorating security situation, sources in the region familiar with the situation told CNN.

Those being evacuated are the last American troops stationed in the Arab nation, which is home to al Qaeda in the Arabian Peninsula, the terrorist group also known as AQAP. The United States closed its embassy in Sanaa last month, after Houthi rebels took over the Yemeni capital. And hundreds of al Qaeda members escaped two Yemeni prisons Thursday and Friday, raising further security questions.

For years, the U.S. military has worked closely with Yemen's government to go after AQAP, together carrying out numerous attacks like the 2011 drone strike that killed prominent al Qaeda figure Anwar al-Awlaki. And U.S. President Barack Obama has hailed this cooperation as a pillar in his anti-terrorism campaign.

"Yemen has never been a perfect democracy or a island of stability," Obama said in January, promoting the policy of "partnering and intelligence-sharing with that local government" as the best approach in a bad situation.

"The alternative would be for us to play whack-a-mole every time there is a terrorist actor inside of any given country," the President said.

Earlier this week, Yemen was rocked by horrific bombings at two mosques by ISIS. Given that this administration has used this country as a blueprint for its counter terrorism operations, its collapse feeds into the narrative that the Obama foreign policy is “asleep at the switch.” Saudi Arabia, which has given billions to Hadi’s government, must be getting more anxious over this move by the United States given that the Houthis allegedly have Iranian ties; the Saudi view Iran as their chief rival in the region, according to the Washington Post. Earlier this month, a Houthi delegation flew to Tehran to strengthen economic and political ties.

Given the current situation, the United States faces future challenges in fighting Al-Qaeda in the Arabian Peninsula, which is one of the most aggressive sections within the terrorist organization. So far, the impact of Obama’s “Smart Power” foreign policy has yielded disastrous results.