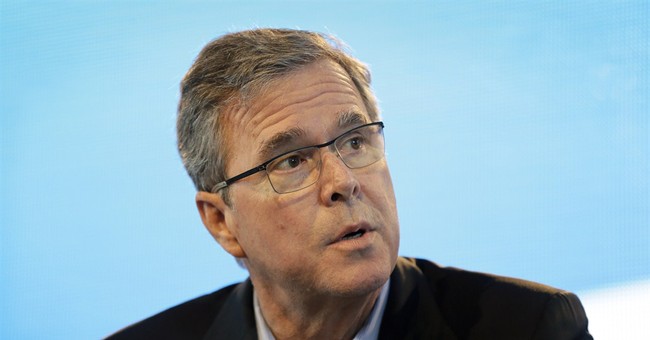 While the former Floridian Governor might be “leading with his chin” as he gears for a possible 2016 run, he denied there was “Bush fatigue” when he visited Iowa earlier this month. Bush probably knows his views on immigration and Common Core aren't popular with Republican primary voters. Yet, he seems to be banking on presenting himself as a candidate who can discuss a wide range of issues to dilute the attacks that he’s too moderate to win the Republican nomination. Additionally, he’s touting his record as governor on the campaign trails, discussing vetoing billions in new spending, tax cuts, ending affirmative action, and school choice. He did that when he entered the lion’s den–for the lack of a better term–at CPAC in February.

On March 6, he was one of a few potential GOP candidates to address the Iowa AG Summit in Des Moines where he discussed his experience on the campaign trail with his father in the late 1980s, reiterated his job creation record as governor, and noted that he’s like Wisconsin Gov. Scott Walker since Florida isn’t as red as some might think (via Radio Iowa):

Bush talked about his campaign experiences here in the 1980s, when his dad was running for president.

“I learned a lot because I did a lot of it,” Bush said, with a laugh. “I learned to be confident speaking. I learned to listen to people well. I enjoyed the experience a lot when I was a young man working as a volunteer in my dad’s campaign full-time and, since I spent so much time in Iowa, I got really close to the state.”

And Bush rejects the idea there is a level of “Bush fatigue” in Iowa.

“That’s not the Iowa that I know,” Bush said. “The Iowans I know are pretty thoughtful and want to get to know the candidates. They don’t discount any of them…I’m going to go make my case and, once people know my record as governor and know my life experience, I think I’ll get a fair hearing.”

Some conservatives dismiss Bush as a “moderate” and cite Bush’s support of immigration reform and his advocacy of so-called “Common Core” standards for American schools. Bush cites his “Florida record” as a rebuttal to the accusation that he’s too moderate to be the party’s presidential nominee.

“I cut taxes every year, totaling $19 billion in eight years. I reduced the state government’s workforce by 13,000. I eliminated Affirmative Action as a policy in our admissions and procurement and replaced it with a system that did not discriminate but yielded better results for African-Americans and Hispanics,” Bush said. “We created the first statewide voucher program in the United States. We had the greatest gains in learning of any state for a period of time and we’re still one on the national leaders.”

Bush became Florida’s governor in January of 1999 and left office eight years later after creating what he describes as “the best business climate Florida had ever seen” with over 1.3 million “net” new jobs created.

“I took on the trial bar, the teachers union. You know, there’s nothing in my record that would suggest that I’m a moderate,” Bush said, with a laugh. “And it is a record of accomplishment and it’s certainly a conservative record in a purple state.”

“Florida’s not a conservative state. It is a swing state and I got to act on conservative principles and apply them,” Bush said. “And I think that same kind of leadership of doing things and being successful doing so in a state that wasn’t a slam-dunk Republican state can be brought to bear in Washington.”

And Bush said he does not plan to accept “the narrative” that he said it being written, suggesting he will be unable to win over segments in the Republican Party who reject any candidate willing to discuss immigration reform.

“First of all, I’d love for them to read my book, “Immigration Wars”. You could probably buy it at a deep discount on Amazon these days,” Bush said. “But in that book we talk about how fixing a broken system would be better for our country’s economic prosperity.”

Bush has seen a decline in his numbers with Republican voters since December, but his fundraising organization is expected to be nothing short of monumental. He’s going to raise money to compete in the early voting states–no problem. Yet, the question for any candidate in 2016, especially Bush, is if he can continue to tread water in a race where more conservative-leaning candidates are in the mix. We shall see if his “Veto Corleone” narrative has legs. We’ve got a long way to go–and challenges for every candidate lie ahead.

The Mob Is Already Targeting Mitch McConnell, and He Doesn’t Care
Redstate
Minneapolis PD to business owners: Reinforcements aren’t on the way
Hotair