Education Is Not For Profit, Says Teachers Union President Making $500k A Year 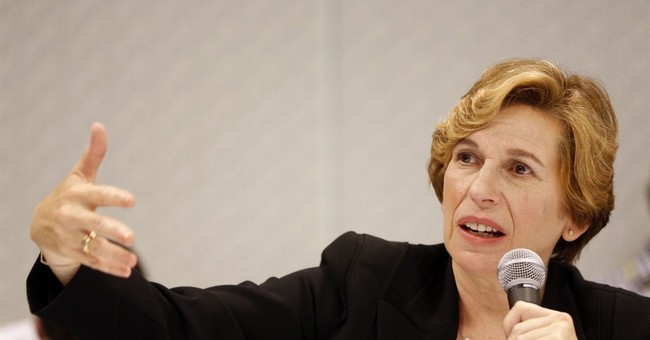 Education is a key issue for Americans; it affects every home in America. For years, we’ve been seeing documentaries, like Waiting For Superman, discussing how our education system is crumbling or in a severe state of decline. Needless to say, teachers unions were not happy about being listed as one of the reasons why our public schools are–more or less–failing. This powerful union often demonizes charter schools, or institutions that adhere to school choice. It was recently reported that hedge fund managers have played a significant role pushing a pro-charter school agenda in New York City.

The New York Daily News has an article about how millions of dollars in the form of political donations are being spent to support charter schools:

The title of the hedge fund bosses’ all-day symposium on Tuesday said it all: “Bonds & Blackboards: Investing in Charter Schools.” Sponsored by the Gates Foundation and the Walton Family Foundation, its aim was to convince investors there’s money to be made in charter schools.

Hedge fund executives have unleashed a tsunami of money the past few years aimed at getting New York’s politicians to close more public schools and expand charter schools.

They’ve done it through direct political contributions, through huge donations to a web of pro-charter lobbying groups, and through massive TV and radio commercials.

Since 2000, 570 hedge fund managers have shelled out nearly $40 million in political contributions in New York State, according to a recent report by Hedge Clippers, a union-backed research group.

The single biggest beneficiary has been Andrew Cuomo, who received $4.8 million from them.

In this era after the Supreme Court’s Citizens United case, the indirect contributions are even more astounding.

The piece also said that such contributions are rivaling that of teachers unions. Randi Weingarten, President of the American Federation of Teachers, reacted to this news by tweeting the NY Daily News piece with this comment:

Education is a pub good-not a profit scheme.Yet hedgers convincing investors there’s $ to be made in charter schls. http://t.co/twmwa13fqU

Yet, the transition that some private colleges are undertaking in becoming nonprofit organizations has also raised the eyebrows of some in the education field–and legal authorities.

Here, the charge is the same; some folks are profiting from education. In this case, owners of private colleges reap profits by becoming non-profit entities. Patricia Cohen of The New York Times delved into the for-profit, non-profit transition of Keiser University in Florida as an example:

Consider Keiser University in Florida. In 2011, the Keiser family, the school’s founder and owner, sold it to a tiny nonprofit called Everglades College, which it had created.

As president of Everglades, Arthur Keiser earned a salary of nearly $856,000, more than his counterpart at Harvard, according to the college’s 2012 tax return, the most recent publicly available. He is receiving payments and interest on more than $321 million he lent the tax-exempt nonprofit so that it could buy his university.

Keiser University, which has about 20,000 students spread over 15 campuses, is one of a handful of for-profit colleges that have switched to the nonprofit arena or are considering that move.

The shift means more restrictions on moneymaking ventures and loss of ownership. But nonprofit schools — defined as providing a public benefit — do not have to pay taxes, are eligible for certain state grants and can receive more money from the federal student loan program.

Consumer advocates and legal experts warn that some institutions might be shifting primarily to avoid stepped-up government scrutiny and regulation.

The piece then goes into how for-profit institutions have been hobbled by controversy, specifically luring (paraphrasing the NYT here) minority and low-income students through false advertising about the value of their degrees, while burdening them with massive amounts of student debt.

Keiser did agree to offer free retraining for its former students after an investigation by the Florida Attorney Generals Office into their admission process, according to the Times, but was the transfer legal? It appears to be that way since the article doesn’t mention any illegality over the transition.

The Education Department has final approval over the shift to nonprofit status, reviewing a school’s financial obligations and administrative capabilities. None have yet been rejected.

Nevertheless, allegations of felonious activity have been made in the for-profit education realm, and lawsuits have been filed at such institutions:

In 2012, Carl B. Barney sold several for-profit colleges, including Stevens-Henager, CollegeAmerica and California College, to a small Denver-based nonprofit, the Center for Excellence in Higher Education, which, according to court documents, consists of a single member: Mr. Barney, its chairman.

Mr. Barney lent the nonprofit $431 million for the sale, and donated millions more, the center’s tax returns and court records show. He also collected nearly $5.1 million in rent from the schools in 2013. The value of its “intangible assets” — such as its reputation and copyrighted trade secrets — was listed at $419 million.

A lawsuit joined by the Justice Department last year charged that the sale was, “at least in part, to evade certain regulatory requirements that apply to for-profit schools,” and that “the schools continue to operate more or less as they did prior to the merger.”

In December, the Colorado attorney general sued Mr. Barney and the schools over misleading and illegal practices. “These allegations are entirely false and they defame us,” Mr. Barney said. “We are fighting back to the very end.”

Concerning Keiser University, Robert Shireman, a former Education Department official with the Obama administration, filed a complaint with the IRS claiming “Mr. Keiser and three board members of violating tax regulations and using the nonprofit ‘for personal gain,’” according to Cohen.  Again, the 990 forms are linked above.

Ironically, Mr. Shireman has been made the subject of a federal investigation over ethics violations during his time at the Department of Education. He allegedly discussed sensitive information with the Institute for College Access & Success (TICAS), according to the Wall Street Journal. TICAS is a non-profit organization that "works to make higher education more available and affordable for people of all backgrounds."

Last March, a federal judge ordered TICAS to turn over all emails relating to their correspondence with Mr. Shireman to the Department of Education’s Inspector General. Even Citizens For Responsibility and Ethics in Washington (CREW) filed a FOIA request for documents relating to Shireman last summer.

We shall see how this all turns out. But given how school choice has been improving the quality of education in the DC-area alone, at least we're seeing results, along with a more accountable system, than from their public education counterparts.