O'Reilly, The Man Who Wasn't There? 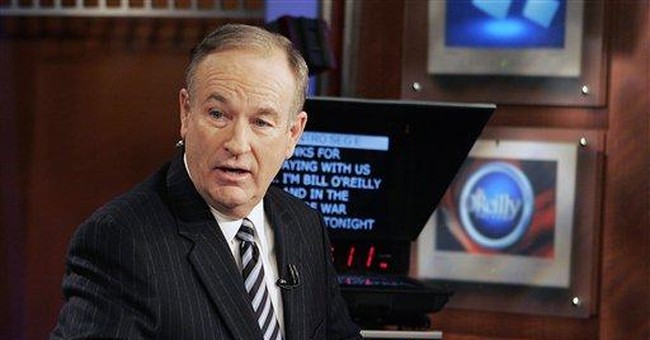 Brian Williams’ suspension was a huge blow to NBC News. A flagship of the mainstream media was broadsided with a torpedo after Williams pretty much lied about his Iraq war exploits and other stories relating to the Lebanon War in 2006 and Hurricane Katrina. It was a fiasco. Some on the progressive left felt the need to respond. Enter David Corn of the left-leaning Mother Jones magazine.

Corn claims that Fox News’ Bill O’Reilly has his own “Brian Williams” problem. While working for CBS News in the 1980s, O’Reilly was sent to Argentina during the Falklands War and El Salvador to cover the conflicts there. He’s also been in Northern Ireland and the Middle East. Corn alleges that O’Reilly embellished his account of events, like Williams, specifically about the Falklands War where he said he was in a “war zone”– and using them to shore up his “combat-hardened” journalist bona fides. So, was O’Reilly that man who wasn’t there during the Falklands War? Well, it turns out it’s pretty much grounded in semantics, but first; here’s Corn’s lengthy piece he wrote along with Daniel Schulman, also of Mother Jones, about this whole…thing:

Yet his own account of his time in Argentina in his 2001 book, The No Spin Zone, contains no references to O'Reilly experiencing or covering any combat during the Falklands war. In the book, which in part chronicles his troubled stint as a CBS News reporter, O'Reilly reports that he arrived in Buenos Aires soon before the Argentine junta surrendered to the British, ending the 10-week war over control of two territories far off the coast of Argentina. There is nothing in this memoir indicating that O'Reilly witnessed the fighting between British and Argentine military forces—or that he got anywhere close to the Falkland Islands, which are 300 miles off Argentina's shore and about 1,200 miles south of Buenos Aires.

Given the remote location of the war zone—which included the British territory of South Georgia and the South Sandwich Islands, more than 1,400 miles offshore—few reporters were able to witness and report on the combat that claimed the lives of about 900 Argentine and British troops. The government in London only allowed about 30 British journalists to accompany its military forces.

American reporters were not on the ground in this distant war zone. "Nobody got to the war zone during the Falklands war," Susan Zirinsky, a longtime CBS News producer who helped manage the network's coverage of the war from Buenos Aires, tells Mother Jones. She does not remember what O'Reilly did during his time in Argentina. But she notes that the military junta kept US reporters from reaching the islands: "You weren't allowed on by the Argentinians. No CBS person got there."

That's how Bob Schieffer, who was CBS News' lead correspondent covering the Falklands war, recalls it: "Nobody from CBS got to the Falklands. I came close. We'd been trying to get somebody down there. It was impossible." He notes that NBC News reporter Robin Lloyd was the only American network correspondent to reach the islands.

O'Reilly did see some action in Argentina—just not war action. He writes in The No Spin Zone that shortly after he hit Buenos Aires—where CBS News had set up a large bureau in the Sheraton hotel—thousands of Argentines took to the streets, angry at the military junta for having yielded to the Brits.

O'Reilly's account of the protest in Buenos Aires is at odds with news reports from the time—including the report from his own bureau. The CBS Evening News that night aired about a minute of video of the protest, apparently including some of the footage that O'Reilly and his camera team had obtained. It showed angry Argentines yelling and denouncing the junta that had lost the war. The only act of violence in the spot was a man throwing a punch against the car of a Canadian news crew.

The protest in Buenos Aires was not combat. Nor was it part of the Falklands war. It happened more than a thousand miles from the war—after the fighting was over. Yet O'Reilly has referred to his work in Argentina—and his rescue of his cameraman—as occurring in a "war zone." And he once told a viewer who caught his show in Argentina, "Tell everybody down there I covered the Falklands war. They'll remember."

This sounds bad, right? Two of O’Reilly’s former CBS colleagues–Eric Engberg and Charles Krause–have called his Argentina claims “absurd” and “a fabrication.” Corn has written succeeding posts on this subject desperately trying to drum up Williams-level media attention. From fact-checking O’Reilly’s statement on the accusations to sending him questions regarding his war correspondences, Mother Jones seems to be doing in print what MSNBC does on television (for it’s half-dozen viewers) which is keeping progressive America balanced and sated in their own alternate universe

As Joe Concha wrote over at Mediaite, this whole episode seems to be a “hit piece” and an extraneous exercise in semantics:

As few are noting, Mr. Corn worked for Fox News as a contributor from 2001-2008. His career would end abruptly there, as the network decided not to renew his contract (which is a nice way of firing someone). Corn would go on to make an impact in the 2012 presidential election after receiving that infamous tape of Mitt Romney‘s “47 percent” comments. It’s still hilarious to see all the acclaim Corn got for basically signing for a FedEx package and uploading a tape to the Mother Jones website. He even won a Polk Award for the effort, even though it was Jimmy Carter‘s grandson who introduced the guy who actually recorded Romney (Scott Prouty) with Corn. Talk about a silver platter, but that never stops Corn from still mentioning it as if he’s trying to beat some kind of quota when appearing on MSNBC, where he serves as a contributor.

So when we look at why Corn would refute O’Reilly’s account of his time working for CBS in Argentina as a reporter covering the Falklands War in 1982, keep all of that in mind in terms of personal and political motivation.As for finding fault in O’Reilly’s account, this appears to be a case of semantics. Note: O’Reilly never said he was on the Falkland Islands, as the Corn piece claims — he’s been consistent in stating he was always in Argentina (Buenos Aires) at the time.

Late yesterday, O’Reilly’s former CBS colleague Eric Engberg made the claim that O’Reilly might as well been at a spring break destination by saying, “It was not a war zone or even close. It was an ‘expense account zone.’”

Of course, very few are exploring motive here when it comes to Engberg either. For those keeping score at home, this is a very easy dot to connect as to why Engberg — who called O’Reilly a “bloviator” in his opening sentence of his “revelation” — suddenly felt compelled to come forward.

As many of you know, Bernie Goldberg is a Fox News Contributor — primarily dissecting stories focusing on media on The O’Reilly Factor and Kelly File. Goldberg also worked for CBS News as an award-winning reporter for 28 years, where he complained about internal liberal bias to upper management within the organization with no success.

Engberg has complained for years about Goldberg singling him out. So what better way to get back at Goldberg and smear O’Reilly and Fox News in the process by disputing O’Reilly’s claim about a riot that absolutely did happen and was even a lead story at the time on the CBS Evening News?

“General public yawns at the ridiculousness of it all,” wrote Concha, who added that this story will die soon, unlike Williams, from a lack of oxygen.

I think the final nail in the coffin for this story was probably when Corn went on Hugh Hewitt's show, who epically grilled him for 45 minutes before hanging up. The video is below, and the entire transcript of the interview is featured on his website. Hewitt asks questions establishing Corn’s credibility as a journalist, which Corn took personally. In fact, this interview negates one of Concha’s claims that Corn had motive stemming from his firing at Fox; Corn said he was happy to leave as he signed on with MSNBC soon afterwards. Yet, he was so “huffy,” as Hugh noted, that one might think he's not genuine about it.

Regardless, the major point that Hugh makes–after a prolonged discussion about the definition of a war zone–is that Corn is “injuring the standard by which war reporters ought to be judged.” In short, Bill O’Reilly isn’t Brian Williams.

Hugh Hewitt: Dexter Filkins, John Fisher Burns, Jake Tapper, these are genuine war correspondents, and they themselves are very hesitant to describe their experiences being dangerous, because they know they’re not even remotely to the danger that real soldiers, sailors, airmen and Marines put them in, that they’re being protected.

David Corn: Of course. You and I agree completely on that.

Hewitt: So if you diminish what Brian Williams did or did not do, and I didn’t comment on it, because I’ve never been in a combat zone. I’m so reluctant to go there. I just think that if you go after O’Reilly for a different agenda, and conflate what he did with Williams, you are injuring the standard by which war reporters ought to be judged, by saying all exaggeration’s alike. That’s my point, David. You think he’s really as bad as Brian Williams?

Now, before people jump on Hewitt and O’Reilly more over this, it should be noted that Hewitt said he didn’t comment on the Williams fiasco because he was never in a war zone. And O’Reilly actually came to the defense of the embattled news anchor on Jimmy Kimmel.

“There’s a lot of people that seem to be real happy that his career has gone down the drain, and that disturbs me,” said O’Reilly.

O’Reilly was also on Hewitt’s show, described his definition of a war/combat zone (there has to be a presence of an organized military force), and found a 33-year memo by CBS Executives in New York that was sent to the Buenos Aires bureau chief stating what a fine job he did down there. NBC Executives reportedly told Williams to stop telling the Chinook story in his public appearances.

Lastly, Don Browne, then-NBC News’ Miami bureau chief at the time of O’Reilly’s assignment in Argentina, pretty much backed up his claims.

No major media outlet has picked up this story; there is some motive behind this story; unlike Williams, someone has come forward to definitively say O’Reilly’s accounts were accurate; and O’Reilly didn’t exaggerate the danger in the way Williams did.

This looks like a big nothing-burger, but one that could serve as a useful example of liberal media bias.