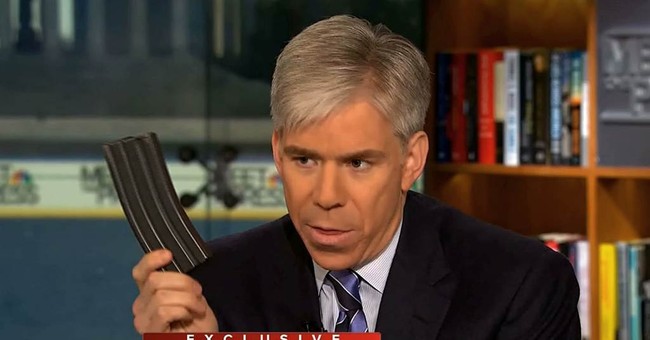 Remember that time when then-host of NBC’s Meet The Press, David Gregory, famously showed a high-capacity magazine on live television in Washington, D.C.? For those you aware of DC’s abysmal gun laws and disrespect for the Constitution, you know that possessing magazines that hold more than ten rounds is illegal within city limits.

After the horrific Sandy Hook shooting in 2012, Gregory showed the magazine while speaking with NRA Executive Vice President Wayne LaPierre. This prompted an investigation by DC police as to whether the NBC host broke DC gun laws. The statute is quite clear: “No person in the District shall possess, sell, or transfer any large capacity ammunition feeding device regardless of whether the device is attached to a firearm."

Prof. William Jacobson of Legal Insurrection filed a FOIA request for all documents relating to the investigation. It took two years, assistance from Judicial Watch, and a lawsuit to obtain the documents in question. In short, DC police wanted to charge Gregory for illegally possessing a high-capacity magazine, a move that was squashed by DC Attorney General Irvin B. Nathan who said that Gregory–as Jacobson put it– was just “too nice a guy,” and had no criminal intent or something (Via Legal Insurrection):

The short version is that the D.C. Metropolitan Police Department warned NBC News that it could not possess an actual high-capacity magazine, but NBC News went ahead and did it anyway. The MPD recommended a warrant for Gregory’s arrest, but that request was nixed by the D.C. Attorney General Irvin Nathan because — my paraphrase — Gregory was just too nice a guy and had no other criminal intent.

That attitude stood in stark contrast to the D.C. Attorney General’s vigorous prosecution of other lesser-known people who also were nice people and had no other criminal intent, but violated D.C.’s gun laws.

D.C. eventually produced more documents, but refused to give us the Arrest Warrant Affidavit. We eventually won a court decision, and today D.C. produced the Affidavit, with some personal information redacted. (Affidavit Below)

The Affidavit demonstrates the facts as to NBC News’ open defiance of the law. This was no innocent error. Yet no prosecution.

Here is an excerpt from the Affidavit:

So, there you have it; gun control acolytes support laws supporting their agenda, until one of their own–you know– breaks them.