Sources: Romney Is Definitely Running In 2016, But We’re Not Sure 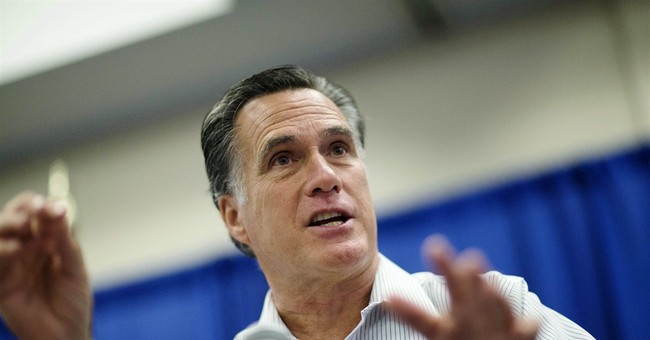 Dan has been reporting on the Mittmentum 2016 beat, much to conservatives’ chagrin. There have been plenty of Romney-Reagan analogies tossed about by his supporters; both were governors; both ran twice for president before the magic third campaign–and Romney has the powerful 'I was pretty much right about everything' card.

While the 2012 nominee seemed less than enthused at the thought of another national campaign, sources close to the former Massachusetts Governor said he’s more serious about a 2016 run since the field doesn’t impress him. For starters, while Romney respects former Floridian Gov. Jeb Bush, he feels his wealth, investments, and working with Barclays will kill him with voters, referencing how voters reacted to Bain Capital (via Politico):

While some people close to Romney insist he hasn’t moved from saying he has no plans to run, the 2012 Republican nominee has sounded at least open to the idea in recent conversations, according to more than a dozen people who’ve spoken with him in the past month.

He [Romney] has assessed various people’s strengths and weaknesses dispassionately, wearing what one ally called his “consultant cap” to measure the field. He has said, among other things, that Jeb Bush, the former Florida governor, would run into problems because of his business dealings, his work with the investment banks Lehman Brothers and Barclays, and his private equity investments.

“You saw what they did to me with Bain [Capital],” he has said, referring to the devastating attacks that his Republican rivals and President Barack Obama’s team launched against him for his time in private equity, according to three sources familiar with the line.

“There’s a core group of people around Mitt who think he should take another stab at it,” said the source. That has grown to include some former donors, who have told other candidates that they are waiting to see what Romney does. With a crowded GOP field expected to take shape, the stance also buys donors time to decide on a candidate.

Those people say Romney has felt vindicated by many of the events of the past two years, such as Russia’s incursion into Ukraine.

[T]op Wall Street executives who met with Romney on his recent trip to New York said they came away from the sitdowns — which mostly focused on Solamere, his son Tagg’s investment firm — more convinced the 2012 nominee is thinking about another run.

“I came away from the conversation with the distinct impression that he was running and that he did not think anyone in the field right now was particularly strong,” said one top executive who met with Romney and requested not to be identified while speaking about a private conversation.

“It sounded like he felt he could win, and that the country had turned in his direction and he looks at the field and does not see anyone who does not look very beatable,” said the executive.

Another person close to Romney said that the former governor’s “body language” is different now and he is “certainly taking a harder look” at getting in the 2016 race. Still, one Romney supporter cautioned that people who want him to run sometimes hear what they want to hear in the former governor’s comments.

Nonetheless, several people have noticed a change in tone, which comes after Romney previously indicated to people that he would only get into the race under an extreme circumstance in which party leaders drafted him during an inconclusive primary process.

If Romney runs (and this is a very uncertain projection), he’ll certainly have the fundraising advantage. He leads in a poll of Iowa Caucus voters, and holds a 19-point lead with New Hampshire voters.

Let’s say, for instance, that he wins those contests in Iowa and New Hampshire. He will gain momentum going into South Carolina and tread water until Super Tuesday, right around the time when states start holding winner-take-all contests on March 16.

Again, anything can happen–and 2016 polls are merely a test of name recognition, as Noah Rothman noted over at Hot Air. Additionally, the field is entirely different. We have potentially solid candidates in Rick Perry, Scott Walker, Bobby Jindal, Marco Rubio, Mike Pence, and Rand Paul. Oh, and Sen. Ted Cruz could toss his hat into the ring.

Given that delegates are awarded proportionally in early contests, Romney could start as he did in 2012: a fragile frontrunner, but one that could be knocked off with this 2016 crop; Sen. Rick Santorum just couldn’t do it in 2012–and I’m not saying that would have been ideal.

Yet, we’ve seen this movie before. Health care will be an issue in 2016–and Romney is a candidate where we cannot talk about it without bringing back Romneycare from the grave. The Jonathan Gruber fallout only exacerbates that point; Gruber worked to overhaul health care in Massachusetts.  Also, does anyone think that Romney will do better with women voters, which the GOP made significant gains in 2014, or Hispanics, especially in Florida, in 2016?

Yes, “I told you so” could be a good campaign slogan for Mr. Romney, but he’s also a two-time loser. Reagan might have triumphed in his third bout, but Romney is no Reagan; sometimes it’s not enough to be right.

I think we’re going to have a very strong field in 2016 without Mr. Romney.

Then again, no one knows if he's running, so we still have to play this torturous game.