Tearjerker: No One Is Buying Wendy Davis' Book 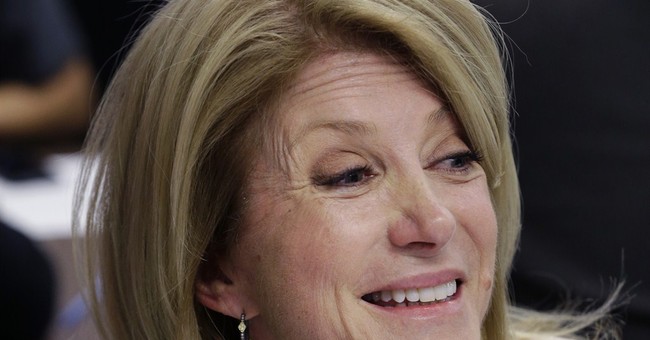 Just because you filibuster a bill against late-term abortion doesn’t make you an icon, nor does it make you a bestseller. Wendy Davis' book, Forgetting to Be Afraid, is performing miserably–and it’s not like it experienced a shortage of news coverage (via Slate):

Wendy Davis’ book is having a tough time of it. Despite enormous levels of media buzz, Nielsen BookScan numbers provided to Slate by a publishing source show only 4,317 copies of the memoir, called Forgetting to Be Afraid, have been sold since its Sept. 9 publication.

Nielsen BookScan doesn’t include all book sales, notably sales at many independent retailers, so the actual number of copies sold is probably higher, although still likely below 6,000. As a point of comparison, Elizabeth Warren’s memoir, A Fighting Chance, sold more than 70,000 copies in its first few months on shelves. And David Limbaugh’s book Jesus on Trial, which was published the day before Davis’, has sold about 65,000 copies, including 6,778 just last week, according to BookScan.

Since filibustering a new round of abortion regulations in the Texas senate last summer, the Democrats’ long-shot Texas gubernatorial candidate has become a near household name and a hero for pro-choice activists. She appeared on the Daily Show Monday night—which probably will give her book sales a little bump—starred in fawning Vogue and New York Times Magazine profiles, and has become an MSNBC favorite.

Her book’s anemic sales aren’t due to any dearth of coverage. Just about every major media outlet—including the New York Times, the Washington Post, USA Today, Huffington Post, and many others—covered the book’s revelation that Davis has had two abortions, both for medical reasons. But that buzz hasn’t translated into sales. The book’s publisher, Penguin imprint Blue Rider Press, didn’t respond to an email about the lackluster numbers.

Then again, Davis’s campaign was already dead on arrival–and this view wasn’t exclusive to conservatives. Over at the New Republic, Nate Cohn, who’s now with the New York Times, wrote last August that she couldn’t win. The Washington Post even said she wasn’t a “top-tier challenger.”

Over at Ace of Spades, the folks there compiled graphs that showed why Davis won’t win in this year’s gubernatorial contest: the Democratic votes aren’t there.

Texas Democrats haven’t been able to win a statewide election since 1994 and that tradition will most likely continue after next week.