War On Women: Is It Over? 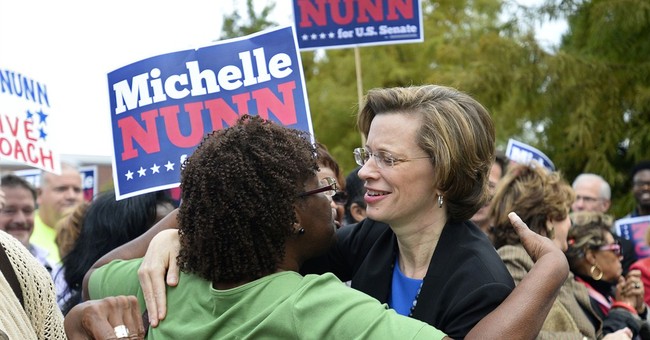 This summer, I posted how Democratic pollsters could be ditching the "war on women" narrative since its reception has cooled among women voters.  At the same time, in 2012, the “war on women” was effective in mobilizing the Democratic base. It forced Republicans to exude more finesse when talking about women’s issues, and forever ingrained in their memories to never have a replay of Todd Akin ever again.  And, they recruited some great female candidates to run for offices across board.

The gender gap that exists between Republicans and women isn’t new, but the Democrats’ “demography is destiny” attitude towards this powerful bloc of voters is also hurting them. For one, women aren’t monolithic voters, which is why the current “war on women” stratagems Democrats are deploying aren’t resonating as well (via CNN):

The attack line -- aimed at painting Republicans as out of sync with women on contraception, abortion and other issues -- isn't resonating like in 2012, when Democrats hurled it at the GOP with a devastating effect. Instead, Republicans have improved their standing among women during this election cycle, narrowing the gender gap in key races that could decide control of the Senate.

The dynamic reflects the painstaking efforts among Republicans to avoid the mistakes of 2012. This time around, there aren't any candidates talking about "legitimate rape" or "binders full of women." And the GOP put up strong female candidates in states like Iowa and Michigan, making it harder for Democrats to attack them as opposed to the interests of women.

Despite the attacks, polls show abortion and contraception are not decisive issues in their tight race — reflecting data that shows the core Democratic constituency of young unmarried women often tune out the mid-terms.

And, despite significant leads amongst women voters in races like North Carolina and Georgia, Democrats haven’t done enough to get women motivated to vote:

.@CecileRichards joined our #NCVotesEarly tour in Durham to talk about what's at stake for women & families in #NCSen pic.twitter.com/SXJwnbfcGd

Debbie Walsh, director of the Center for Women and Politics at Rutgers University, said women voters may simply not be seeing enough from Democrats to get them out to vote.

There's a paradox here. Obama's low approval ratings are dragging down vulnerable Democrats. But the fact he's not in the national spotlight drawing a clear choice on women's issues with an opponent like Romney is making it more difficult to crystallize the arguments.

In other races, like Kentucky, Sen. Mitch McConnell and his Democratic challenger, Alison Lundergan Grimes, are virtually splitting women voters right down the middle 44/43 (via National Journal):

In Kentucky, voters might be more comfortable keeping the experienced McConnell than electing fresh-faced Grimes. As Ebola and ISIS grab headlines, the so-called security moms may be poised to cast ballots for Republicans.

Republican strategists also say that the 2014 midterm election proves that Democrats' "war on women" rhetoric they counted on to secure victories in 2012 has finally lost its luster.

Kellyanne Conway, a Republican pollster, says that Democrats are not as vulnerable as they were in 2010, when Republicans won women nationally by a single point, but they are certainly in a more precarious position than in 2012, when Obama captured the women's vote in the presidential election by 12 points.

"Women hate to be taken for granted and the Democrats totally stepped in it this year," Conway says. "They figured if we keep beating the 'war on women' drum, we can win."

Many Democrats expected that Republican Rep. Cory Gardner's support of personhood legislation—which would have made some forms of birth control illegal—would be enough to cement Sen. Mark Udall's support among women. Yet, Gardner threw a curveball: He renounced his position on personhood and released a June editorial in The Denver Post calling for birth control to be available over the counter.

In its endorsement of Gardner, The Denver Post admonished Udall for staying the course on the "war on women" narrative when he could have been highlighting his own record in the Senate.

"Udall is trying to frighten voters rather than inspire them with a hopeful vision. His obnoxious one-issue campaign is an insult to those he seeks to convince," the editorial board wrote.

The latest Suffolk University poll found that Gardner led Udall 46 percent to 39 percent among women. However, the pollster told National Journal that with the margin of error it could still be perceived as a narrow lead or tie.

Again, that’s not bad. A Republican drawing an equal share of the women’s vote with a Democrat could take a slim lead in the polls because Democrats have lost male voters; these guys matter on the margins. It’s why McConnell has been leading Grimes in the polls since summer; Grimes has a 10-point deficit with men. Oh, and did I mention that she’s a terrible candidate? That might be the more plausible reason for why she will probably lose next week than the “fresh-faced” hypothesis.

Even a slight Republican deficit amongst women voters allows room for maneuverability.

Now, Democrats say that the polls are wrong and the GOP still can’t communicate with women.

In Texas’ gubernatorial race, a focal point in this illusory war, Wendy Davis is trailing her Republican opponent, Attorney General Greg Abbott, by double-digits–with women voters. That’s right; Abbott is leading Davis with women 49/37. But should we be surprised? The reason this has become an abject slaughter is that her campaign is pretty much a clown show. As a result, the margin of victory for Abbott is huge; he’s leading 53/35 over Davis.

This image courtesy of NYT/CBS NEWS/YouGov