Are Democrats 'Ditching' The War On Women? 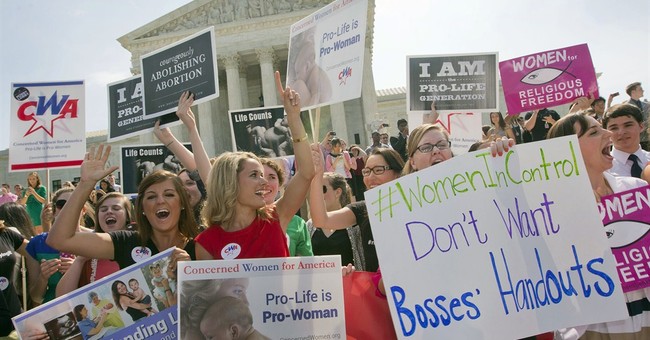 With the recent Hobby Lobby decision, one would think this legal victory for conservatives could galvanize single women into turning out for Democrats in the upcoming midterm elections. It’s still a possibility. After all, the Daily Beast is running op-eds showing how women are driving the Democratic Party’s agenda:

My friend Doug Sosnik has forgotten more about analyzing polling data than most of us will ever know, but he mistakes the wave for the currents in his POLITICO Magazine cover story, “Blue Crush: How the left took over the Democratic Party.” By focusing on ideology, Sosnik’s analysis ignores what is driving the power shift in the Democratic electorate. The reason that Democrats have achieved a consensus supporting LGBT rights, marijuana legalization and immigration reform is because they now enjoy a double-digit lead among women, especially unmarried women.

The left hasn’t taken over the Democratic Party. Women have. Sosnik does write that he can’t imagine “a viable Democratic presidential candidate,” much less a nominee, “who isn’t willing to take clear positions on … supporting women’s health and their reproductive rights,” but this core value is embedded among positions on hydraulic fracking and the minimum wage. In that word salad, it’s hard to tell the side dish from the entree. Put simply, when polls show a double-digit gender gap — and women turn out — we know who’s going to win and why.

The Democrat’s so-called “war on women” has surely helped mobilize these ladies into a juggernaut of a voting bloc. So, why are Democrats shying away from their signature slogan? The National Journal reported on July 31 that this narrative may have run its course – and that Hobby Lobby might not bring it back with a vengeance (emphasis mine) :

Democrats want to talk about "personhood" and reproductive freedom. They want to tell voters about a stubborn pay gap and women hurt by a low minimum wage. But what they don't want to do is talk about a "war on women."

Indeed, the party that so effectively deployed the "war" rhetoric to help defeat Mitt Romney in 2012 has now sworn off its catch phrase, dropping it almost completely from a campaign strategy that, in so many other ways, is still very much about women's issues.

The Journal piece also noted that Kentucky Democratic Senate candidate Alison Lundergan Grimes, who thinks Israel’s Iron Dome protects it from underground attacks, is using Senator Mitch McConnell’s votes against the Violence Against Women Act and Equal Pay as an example of this shift in messaging strategy. At the same time, McConnell and Grimes are polling even with Kentucky women.

Nevertheless, it still means Republicans should get more aggressive in debunking these disingenuous attacks, reaching out to single women by showing we’re, amongst other things, not insensitive towards their needs, and sharpening our messaging to avoid more Todd Akin moments.

On the other hand, there are other voting blocs that have just as much sway in elections. But, let's not discount that "war on women" tactics could return in an ugly way.