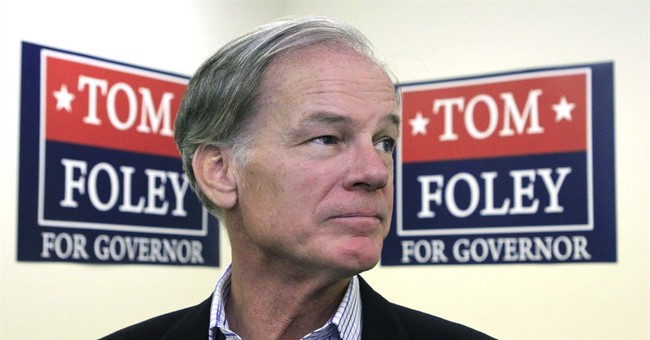 It looks like Republicans will control the majority of governorships after the 2014 cycle. They lead most gubernatorial races, albeit with small margins. Things look grim for incumbent Republican Governor Tom Corbett of Pennsylvania, but Republicans are in fairly decent shape in blue states like Illinois and Connecticut.

In Illinois, Republican challenger Bruce Rauner has a decent 7-point lead over Democratic Governor Pat Quinn, which is probably why both men “went for the jugular” in their first non-debate with the Chicago Tribune editorial board. Quinn has been struggling to break beyond 40-43 percent in the polls since January.

In Connecticut, Democratic Gov. Dannel Malloy’s Republican challenger, Tom Foley, holds, on average, nearly a 7-point lead over him with likely voters. The new Quinnipiac poll also gives Foley a 6-point lead. While Malloy has the edge over Foley with women voters 45/38, it still makes him competitive within that demographic and offsets any advantages due to Foley’s massive lead with men 54/35. Additionally, Independent voters favor Foley over Malloy 48/35.

When it comes to favorability, both men are under water; Foley has a slightly better rating at 42 percent compared to Malloy’s 40 percent. For Malloy, his unfavorable ratings are high at 53 percent, with 40 percent saying they strongly dislike their current governor; an aspect Quinnipiac notes will be an additional obstacle in his re-election bid.

A further breakdown shows Malloy trailing Foley badly on key issues in this campaign, which are the economy/jobs, taxes, and a balance in government spending. In those three areas, on average, Malloy trails Foley by 21-points: 54/37, 59/31, and 54/36. Also, 48 percent of likely Connecticut voters think that Malloy doesn’t care about “their needs and problems.” On a positive note, 57 percent think he has “strong leadership qualities.” Yet, 53 percent also said the same thing of Foley.

While gun control might not be a top-tier issue, it has been brought up in debates. Regardless, Foley is much more gun friendly than Malloy and a pro-gun governor winning in the state that set off the latest anti-gun crusade across the country is interesting.

Senate Democrats Block Additional Funding For Coronavirus Relief and Paycheck Protection Program
Reagan McCarthy
To All Those Biden Supporters Out There, Here's the Bill He Wants to Leave Us as President
Matt Vespa
Another Reason to Be Optimistic? Biden Is Underperforming Hillary Clinton's 2016 Numbers In Key States
Matt Vespa
Is AG William Barr on the Chopping Block?
Matt Vespa
Paging Dr. Fauci: Why Is He Silent on Whether the Women's March was a 'Superspreader Event'
Matt Vespa
Watch: Hickenlooper Signals Support For Court Packing if Senate Confirms Judge Barrett
Reagan McCarthy
CARTOONS | AF Branco
View Cartoon
Most Popular