What Happens To The Gun Control Debate If Malloy Loses In Connecticut? 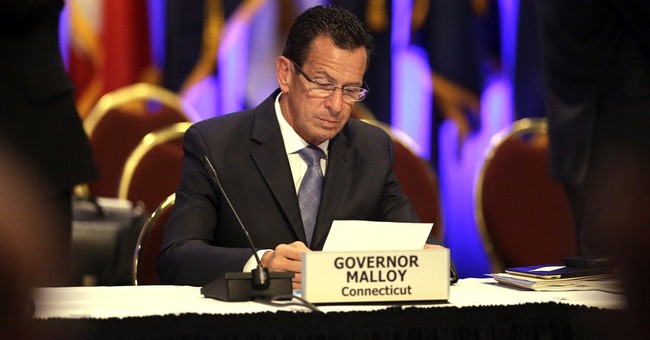 There’s one highly competitive gubernatorial race happening this year and it isn’t in Wisconsin; it’s in Connecticut. Right now, incumbent Democratic Governor Dannel Malloy is in a tight race with Republican Tom Foley. Foley ran against him in 2010 and lost by a mere 6,500 votes. Besides the economy, gun control is being debated on the campaign trail. And Mr. Foley isn't being hurt by his position on the subject.

On average, Tom Foley has almost a 5-point lead over Malloy. Ramsussen and CBS News/NYT polls have Foley up 7 points over Malloy. This is a potentially embarrassing political defeat for the anti-gun left; the state that started another national dialogue about gun control, which conservatives won, would elect someone who’s more Second Amendment-friendly for governor almost two years after Sandy Hook. "Even Connecticut voters reject gun control" would be the new narrative in this debate that often ends in defeat for liberals.

What would Bloomberg and his cronies have left to fall back on besides petty open carry bans at grocery stores and retail chains in states that already permit such an exercise of constitutional rights statewide?

In a debate last week, gun control was brought up. Gov. Malloy said the new anti-gun laws he signed into law was keeping the Nutmeg State safe. Mr. Foley obviously disagreed, citing government overreach and that violent crime is down across the county (via WSJ):

Gun control has emerged as a major campaign issue, with Mr. Foley criticizing firearms restrictions the governor signed into law in 2013 in response to the deadly school shooting in Newtown. The package included universal background checks, a ban on sales of ammunition magazines with 10 or more rounds and a ban on the sale of certain types of firearms the state defines as "assault weapons."

The changes, Mr. Malloy said, have contributed to a declining statewide homicide rate: "I believe what we have done has made Connecticut safer."

Mr. Foley countered that violent-crime rates were falling across the U.S., adding that the new laws inconvenience gun owners and wouldn't prevent another mass shooting. "This was so overreaching that it went way, way beyond in what I think would have been an appropriate response to Newtown," said Mr. Foley, an ex-ambassador to Ireland and former private-equity manager. "It's not good leadership. It's grandstanding."

At the federal level, the Manchin-Toomey bill also sought to expand background checks and there was an amendment to ban assault rifles that went down in flames. Even Connecticut Senator Richard Blumenthal said that this bill would not have prevented the tragic Newtown shooting.

There’s also the independent factor. While Connecticut is reliably Democratic, Democrats are not the majority in the voter rolls; it’s independents. Even Clinton pollster Douglas E. Schoen noted that these voters could decide the election in 2014–and that Foley is mounting a campaign that caters to their interests. He also noted Governor Malloy’s inability to campaign on Sandy Hook since it’ll come off as politicizing tragedy and “rub voters the wrong way.” Then again, anti-gun liberals did just that in the months after the tragedy, but got nothing in return for it.

Yet, there was some action taken at the local level.  In February of 2013, the Newtown school board voted in favor to allow armed guards to be stationed at schools, which is an initiative endorsed by the National Rifle Association.

As with any election, we shall see what happens, but if Malloy loses; what does this mean for gun control in America? We all know the movement has suffered significant legislative and legal defeats, but does a Foley win mean this anti-civil rights crusade is on life support? I sure hope so.