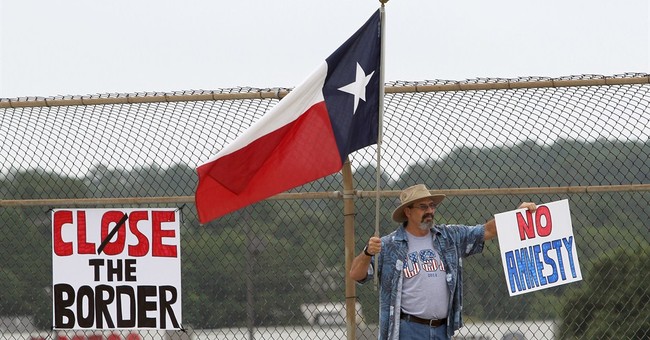 As Katie wrote earlier today, President Obama’s decision to delay any major decision on immigration until after the midterms has his liberal base in a furor. It has become a hot issue, which was further complicated with the tens of thousands of unaccompanied minors turning up at the border. Border security has seen a huge bounce in the number of Americans viewing it as a priority. Fifty-one percent of Americans think border security is a priority. Last week, the evidence of a broken border was evident in the composition of the California’s workforce, where 10 percent of all workers are illegal aliens (via LA Times):

A report released Wednesday [9/3/14] by researchers at USC found that immigrants who are in California illegally make up nearly 10% of the state's workforce and contribute $130 billion annually to its gross domestic product.

The study, which was conducted in conjunction with the California Immigrant Policy Center, was based on census data and other statistics, including data from the Department of Labor and the Department of Homeland Security. It looked at a variety of ways the estimated 2.6 million immigrants living in California without permission participate in state life

Among the study’s findings:

Immigrants who are in California illegally make up 38% of the agriculture industry and 14% of the construction industry statewide.

Half of the immigrants in the state illegally have been here for at least 10 years.

Roughly 58% do not have health insurance.

Nearly three in four live in households that include U.S. citizens.

And this is just one state. Yet, we shall see what happens after the midterms. Guy mentioned how Obama can issue a blanket pardon for these folks, which would be an unprecedented, but possibly not illegal as the pardon power is one of the “least limited” powers outlined in our Constitution. The Heritage Foundation also reaffirmed this, which makes it all the more unsettling.

If President Obama is forced to deal with a unified Republican Congress in solving immigration, which is highly possible, come January 2015; then it will be interesting to see what happens next.