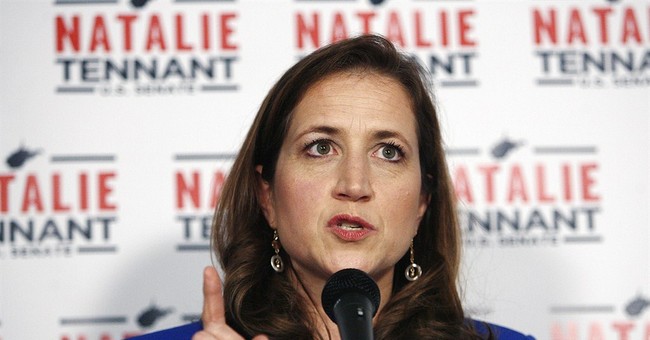 Democrats from red states are feeling the heat. Their constituents don’t like Obama, or his polices, and they have to somehow convince them that they’ll be somewhat independent when it comes to fighting for their interests.

Natalie Tennant, the Democratic candidate in West Virginia’s Senate race, is trying to disseminate that message of independene with this ad rebuking Obama’s energy policy. It was released at the end of July. She says that she’ll protect coal jobs in West Virginia and “stand up to leaders of both parties who threaten our way of life.” She then proceeds to turn off the power to the White House.

It’s strong stuff. But when asked about her support of Obama earlier this week by a disgruntled West Virginia resident at a Democratic campaign event, Tennant walked a waffled line. The gentleman on the video expressed frustration over the EPA’s new regulations.

While it didn’t help that a tracker captured this exchange, Tennant’s campaign manager, Major General Allen Tackett, didn’t do her any favors by interjecting saying that Tennant agrees with Obama on “most of his policies.” He later said he misspoke (via Metro News):

“(I said it) Just in the heat of the moment, just trying to defuse the situation.”

As the Charleston Daily Mail reported on August 5, Tennant isn’t your typical Democrat running this year. She’s against expanded background checks on firearms and the employer mandate of Obamacare. But, that might not be enough to carry her to victory this November, as she still carries the Democrat label. In 2010, that label virtually wiped out the fiscally conservative Blue Dog Democrat coalition in Congress due to the nation's negative reaction over the passage of Obamacare.

Yet, this exchange does capture what National Journal’s Josh Kraushaar was saying about authenticity and the role it’ll play in this election cycle. You can see how some people might find Tennant inauthentic given her interview on Fox And Friends last week:

On average, Tennant’s Republican opponent, Congresswoman Shelley Moore Capito, is ahead in the polls with a comfortable nine-point lead. If Capito is elected this fall, she'll be the first Republican to hold a West Virginia Senate seat in nearly sixty-years.