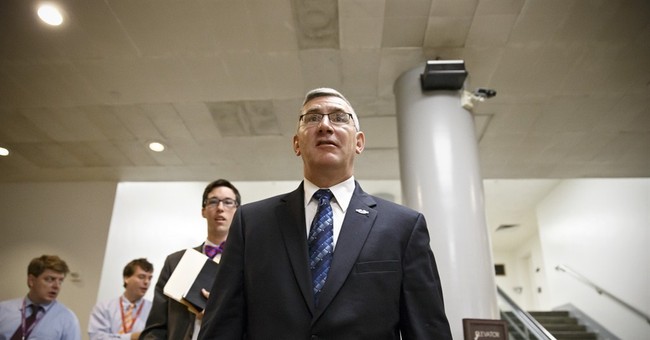 Well, “papergate” continues to plague Democratic Montana Sen. John Walsh, who didn’t attribute roughly a quarter of his paper for his Master of Strategic Studies at the U.S. Army War College in Carlisle, Pennsylvania.

After allegations of plagiarism broke, the Montana Senator said he had Post-Traumatic Stress Disorder while writing the paper, but didn’t want to blame his lapse in judgment on PTSD, according to the Associated Press:

Walsh told The Associated Press when he wrote the thesis, he had PTSD from his service in Iraq, was on medication and was dealing with the stress of a fellow veteran's recent suicide.

"I don't want to blame my mistake on PTSD, but I do want to say it may have been a factor," the senator said. "My head was not in a place very conducive to a classroom and an academic environment."

Nevertheless, the fact that PTSD was even brought up, coupled with the plagiarism allegations, has angered veterans (Bozeman Daily Chronicle):

Retired Montana National Guard Sgt. Maj. Timothy Pentecost fought in Vietnam and Iraq, and according to the Department of Veterans Affairs, is 100 percent disabled by post-traumatic stress disorder. He also worked with Walsh.

“It's totally bogus,” an outraged Pentecost told the Chronicle. “I can't believe he's using the PTSD as a reason for what he has done in plagiarizing the paper, and that weak response he had was terrible.”

Brian Rudolph, 31, an Iraq and Afghanistan combat veteran from Great Falls, said he still has not heard Walsh apologize.

“I don't know if it's going to do a whole lot; I don't know how much people overall take that into consideration,” said Rudolph. “It's not that hard to cite something. It's quite a bit of his paper really. But I think there's a lot of people out there who have never had to write a paper so they might not understand the whole deal about it.”

The Chronicle added that Rudolph, who is undecided on the Montana Senate Race, said that the PTSD reference was “an irrelevant play for the public's sympathy.”

At the same time, members of the press, specifically the Washington Post, are aghast over the fact that a fourteen-page paper is sufficient for a Master’s Degree.