It's Not Over Yet 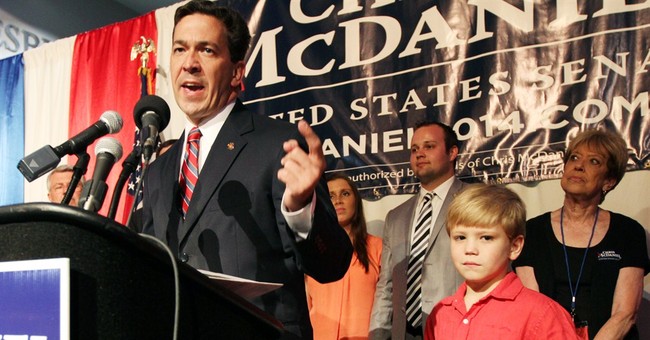 With the allegations of voter fraud stacking up in the aftermath of the Mississippi runoff, where does the McDaniel campaign go from here? Hypothetically, let’s say these allegations are true: It’s reprehensible; it’s outrageous; and legal action should be taken promptly. That being said, McDaniel could have a lot of evidence to present in court, but it seems that time is running our for Sen. Thad Cochran’s Tea Party challenger, who apparently is also lacking the funds for a legal fight (via Associated Press):

McDaniel has called the outcome a sham and excoriated Cochran on television and talk radio for seeking votes from "liberal Democrats." While McDaniel stops short of mentioning race, Mississippi is a state where Democrat is often synonymous with black. Cochran says there's nothing wrong with seeking support from Democrats and independents — it's something he's done for decades.

McDaniel faces daunting obstacles. In addition to the difficulty of proving widespread illegal voting, state law and state history also may work against him.

When McDaniel goes to court to seek a new election, he will have to show evidence to substantiate his claims of widespread illegal voting, which he has not done so far, or persuade a judge that the election was so sloppily conducted that a new runoff should be ordered.

Money is a problem, too. Even after the Senate Conservatives Fund wired McDaniel $70,000 for his challenge, he begged for money. "We don't currently have the resources to mount the legal challenge that this case deserves," McDaniel wrote Wednesday in the latest of several emails soliciting donations.

Mississippi law requires McDaniel to file his first election challenge with the state Republican executive committee. His campaign attorney, Mitch Tyner, said that is likely to happen next week. Ten days later, McDaniel could file a lawsuit in any county where he believes problems occurred. The state Supreme Court would appoint a special judge.

The general-election sample ballot must be given to local election officials by Sept. 10, which is 55 days before the Nov. 4 general election. That squeezes the time for a lawsuit and a new primary runoff.

Nevertheless, his campaign seems to be ready to fight to the bitter end. Noel Fritsch, a spokesman for the McDaniel campaign told Townhall.com:

Given the growing number of serious allegations of criminal misconduct surrounding the primary runoff in Mississippi, conservatives here and from around the United States are coalescing around the effort to ensure the Republican Party operates primaries with integrity. We're honored to have financial support from many of those supporters. We are currently endeavoring to gain access to election records in all 82 counties, most of which have worked with us very well, but unfortunately some counties, like Jackson County and Circuit Clerk Joe Martin, are obstructing access to election records. Once we've gained access to records in all the counties, we will be able to make a decision about taking a challenge with the State Executive Committee. It's interesting to note that the Cochran campaign claims there are a small number of irregularities in counties where access to the records has not even been granted."

So, it seems like the battle for Mississippi isn’t quite over yet – at least, not for McDaniel supporters. Recently, Texas Senator Ted Cruz called for an investigation into the alleged voter discrepancies in Mississippi and Missouri GOP Chairman, Ed Martin, wants the RNC to conduct a review of the racially-charged ads that aired as well. Let's see how this plays out.