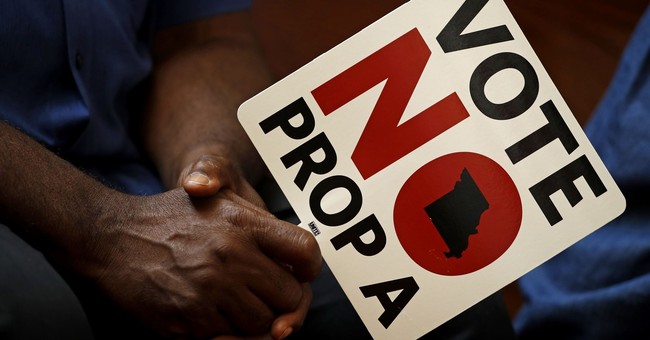 Voters in Missouri solidly rejected Proposition A on Tuesday, an amendment to the state constitution that would’ve made The Show-Me State “right-to-work.”

Prop A, which was passed by Republican state officials and had not yet gone into effect, would have banned mandatory union fees in workplace contracts.

The referendum marked the first chance for the public to weigh in on union powers since the U.S. Supreme Court ruled in late June that public sector employees cannot be compelled to pay fees to unions. Missouri's ballot measure essentially would have extended that to all private sector employees, mirroring laws that already exist in 27 other states.

At issue are so-called fair-share fees, which are less than full dues but are intended to cover unions' nonpolitical costs such as collective bargaining. Unions say it's fair for people to pay the fees, because federal law requires them to represent even those employees who don't join. But supporters of right-to-work laws counter that people should have the right to accept a job without being required to pay a union.

Former Missouri Gov. Eric Greitens signed a right-to-work bill passed by the Republican-led Legislature in February 2017. It was set to take effect as law on Aug. 28. But before that could happen, union organizers submitted enough petition signatures to suspend its implementation pending a statewide referendum.

Right-to-work supporters had been banking on Greitens to help draw money and attention to their campaign. But Greitens resigned amid scandal on June 1 and disappeared from the public spotlight. (AP)

AFL-CIO President Richard Trumka said the vote goes to show how “out of touch the Republican legislature is with their constituents.”

“The workers in that state don’t want anything to do with right to work,” he added.