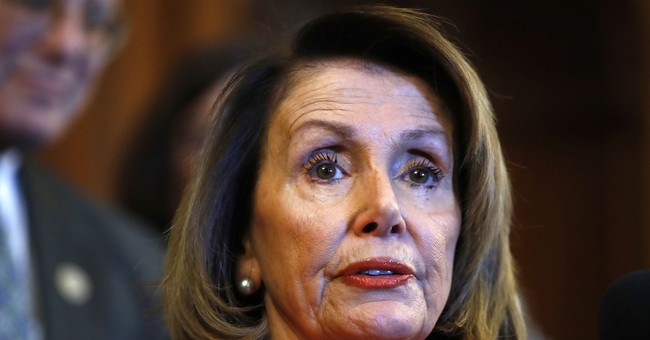 House Minority Leader Nancy Pelosi mocked the group of men leading immigration talks as “the five white guys” after this week's discussions on the Deferred Action for Childhood Arrival program did not include any minority members of Congress.

“The five white guys I call them, you know," Pelosi said at her weekly news conference. "Are they going to open a hamburger stand next or what?” she said.

"That could have been done months ago," Pelosi added, referencing the negotiations this week. "The very idea that this week they're saying, ‘oh let's get four white guys and Gen. Kelly to come and do this–'"

The Democratic Party has “great diversity” she went on to argue.

"You have to understand, in our caucus we are blessed with great diversity–the understanding of the issues, the ability to translate policy into the lives of people, the sensitivity even on the wording is really important for people who have been engaged in these issues to be there at the table," Pelosi said.

The “white guys” comment was quickly rebuked by Hoyer, who called it “offensive.”

“That comment is offensive. I am committed to ensuring DREAMers are protected and I will welcome everyone to the table who wants to get this done,” he told Politico.

Pelosi’s spokesman Drew Hammill sought to downplay the remarks, noting that it was not meant to be a criticism of members of her party.

“Leader Pelosi has every confidence in the leadership of Whip Hoyer and Senator Durbin, which they have demonstrated on this topic for years," he said. “It’s not a question of who’s there but who’s not there.”