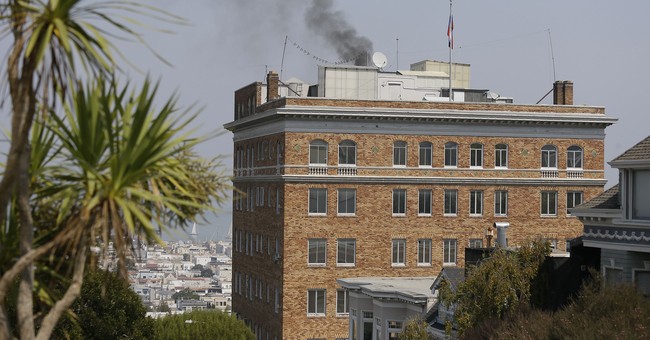 One day after the Trump administration ordered the Russian consulate in San Francisco be closed, black smoke was seen pouring out of the building’s chimney.

The Russians were “burning unidentified items in a fireplace,” the AP reported, and turned away firefighters who showed up to the scene.

Obviously, being in San Francisco in early September, they were not using the fireplace for heat.

Mindy Talamadge, a spokeswoman from the San Francisco Fire Department, said the department received a call about the smoke and sent a crew to investigate but determined the smoke was coming from the chimney.

"They had a fire going in their fireplace," she said.

Talmadge said she did not know what they were burning on a day when normally cool San Francisco temperatures had already climbed to 95 degrees by noon.

"It was not unintentional. They were burning something in their fireplace," she said.

The consulate must close by Saturday so workers are hurrying to close up shop, destroying any material they don’t want the U.S. to find in the process, it seems.

"In the spirit of parity invoked by the Russians, we are requiring the Russian Government to close its Consulate General in San Francisco, a chancery annex in Washington, D.C., and a consular annex in New York City. These closures will need to be accomplished by September 2,” State Department Spokeswoman Heather Naurt said Thursday. "I want to point out that even after these closures, Russia will still maintain more diplomatic and consular annexes in the United States than we have in Russia. We’ve chosen to allow the Russian Government to maintain some of its annexes in an effort to arrest the downward spiral in our relationship."

She added: "I want to also highlight that it’s our hope that with this move in the direction of parity, which the Russians said they were seeking, we can avoid further retaliatory actions by both sides. Our goal is really to find a way to get to better relations between our two countries.”

The move comes after Russia expelled more than 700 U.S. diplomats from Russia after Congress passed a new round of sanctions in July.