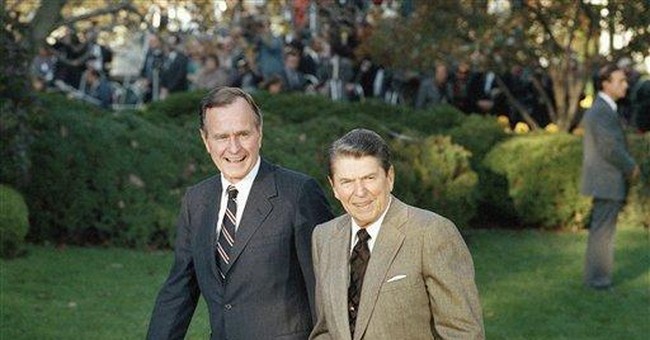 More than 20 years after his presidency, and now that the dust of history has settled a bit, few would argue against George H. W. Bush’s incredible foreign policy wins, especially in such a short period of time. While author John Sununu, former New Hampshire governor and Bush chief of staff, goes into great detail about these accomplishments in his new book “The Quiet Man: The Indispensable Presidency of George H. W. Bush,” equal attention is given to his impressive record of achievement on the domestic level, one that was—and still is—overlooked, misunderstood, and underappreciated.

When he first stepped into office the odds of success at home and abroad seemed ever stacked against the 41st president of the United States. Not only did Democrats hold the House and Senate, but the relationship between the executive branch and Congress was deeply battered over the Iran-Contra affair that unfolded during President Ronald Reagan’s second term. And at the international level, while significant progress was made between Reagan and Mikhail Gorbachev, the U.S. and Soviet Union still had tens of thousands of missiles pointing at each other—a clear sign the Cold War was still very much alive.

It’s within these contexts that Bush’s leadership style shone. His emphasis on personal contact and developing relationships allowed him to negotiate more successfully than most, which facilitated the end of the Cold War, helped bring about peace in Europe, and reinvigorated economies across Latin America.He was also a tough leader, and one who would not let aggression stand in the world—the Gulf War and dealing with Panamanian dictator Manuel Noriega being clear examples of that.

Bush’s domestic feats were equally impressive, however, even if the press failed to recognize it. Sununu compares the discrepancy in the public narrative about Bush’s presidency to Babe Ruth: famous as a slugger, forgotten as one of the greatest pitchers of all time. “Similarly,” writes Sununu, “George H. W. Bush’s foreign policy wins were so impressive that they overshadowed his dramatic domestic policy achievements and the dexterity he displayed in reaching those milestones.”

Aside from immediately repairing the White House’s relationship with Congress, Bush fixed a collapsing savings and loan program, and managed to get major legislative items passed even while Democrats controlled the congressional process. Some of these items included energy deregulation legislation, the Clean Air Act of 1990, a major crime bill, child care legislation, the Americans with Disabilities Act of 1990, and a five-year deficit reducing budget agreement, which was reviled at the time for breaking the “read my lips” campaign promise of no new taxes. This agreement is now recognized as having been an effective and successful policy initiative for which Bush was later given the John F. Kennedy “Profiles in Courage” award for the political valor he demonstrated in negotiating the agreement.

So while he lacked a snappy catchphrase to encapsulate his agenda, and was hounded by the press for the so-called “vision thing,” Bush was not afraid to tackle the most controversial issues, no matter the odds, with a principled conservative approach. Even on items that ultimately hurt him in his bid for reelection, such as the budget, he always did what was “required for the good of the country instead of what was politically expedient for him personally.”

Offering an insider perspective few are more qualified to give, Sununu sets the record straight in this richly detailed account of Bush’s presidency, including 41’s journey to the White House, the whole gamut of his domestic and international endeavors and accomplishments, and what went wrong in the run-up to the 1992 election. In Sununu’s words, he does the bragging on Bush’s behalf. But the book is far from a dry historical narrative; Sununu engages the reader by weaving in personal anecdotes about the Bushes, detailing the trials and tribulations of life as a chief of staff, and putting forth a behind-the-scenes look at what it was like dealing with a biased media, the difficulty involved in selecting Supreme Court justices, as well as the issues involved in working with members of the GOP who were more concerned about their own personal agendas than the good of the nation.

Given we are more than two decades out, much ink has already been spilled about The Quiet Man, but Sununu’s insider account gives the reader a look at the consequential presidency of his former boss—a thoughtful, modest, and intelligent leader—as never before seen.