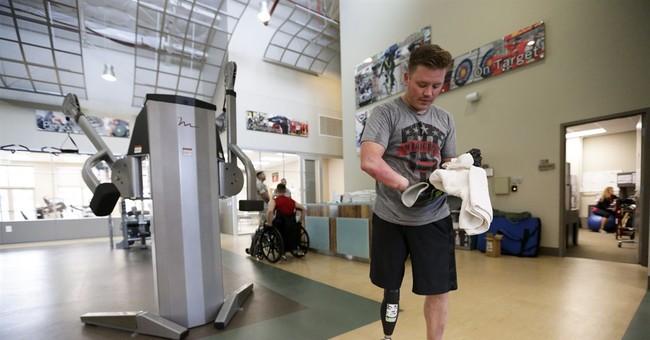 Each year Warrior Beach Retreat provides an all-expenses paid trip to Panama City, Florida for more than 100 wounded warriors and their spouses/caregivers. Thanks to the charity of local residents and businesses, these people who’ve sacrificed so much for this country can enjoy a week of rest and relaxation.

While it’s surely a vacation to remember, some veterans on this year’s trip probably wish it were one they could soon forget.

Investigations have been launched at two universities over accusations that fraternity members taunted wounded war heroes, urinated on an American flag, and spit on a wounded veteran and his service dog in Panama City Beach, Florida.

The April 17 incident, involving Zeta Beta Tau fraternity members from the University of Florida and Emory University, has infuriated residents of Panama City.

Naturally, school and fraternity officially were disgusted by the behavior and responded swiftly. Zeta Beta Tau at UF initially expelled three students; the school followed up by suspending the fraternity, and now, they’ve closed it completely.

The closing of Zeta Beta Tau’s fraternity comes a week after the school suspended the fraternity, which expelled three of its members after finding out about their inappropriate behavior. The school previously said it was charging the fraternity with obscene behavior, public intoxication, theft, causing physical or other harm and damage to property.

The fraternity’s Florida chapter has 128 active members. The organization was founded in New York City in 1898 as a fraternity for Jewish students, who at the time were not allowed into other Greek organizations. The national organization agreed to the closure.

"We are absolutely disgusted by the accusations that have been made regarding the behavior of members of this chapter. ZBT has a long history of serving our country, with brothers currently serving in all ranks of the military," said ZBT Fraternity International President Matthew J. Rubins.

"I continue to be saddened and disappointed by the reported mistreatment and disrespect of our military veterans," University of Florida President Kent Fuchs said in a statement. "Our university has always honored, and will always honor, the service of veterans. The reported conduct of this fraternity contradicts the values of service and respect that are at the center of this university."

No human being, much less veterans who served and sacrificed greatly for our country, deserves to be treated the way these college kids behaved. And the school/fraternity has the right and responsibility to punish them accordingly. The efficacy of shutting down the entire fraternity over the actions of individuals is what I question, however. It is reactionary and does little to address the behavior of the students in question.

While we can’t exactly draft them and put them through what these combat vets did, perhaps a more appropriate response would be mandatory community service at the VA. And regarding the flag desecration, that carries penalties of its own, including imprisonment and/or a fine.

Regardless of what happens to the students, let us hope that these veterans know that Americans’ love and appreciation for what they’ve done for this country is greater than any single instance of maltreatment.