House Dems Have Boehner's Back 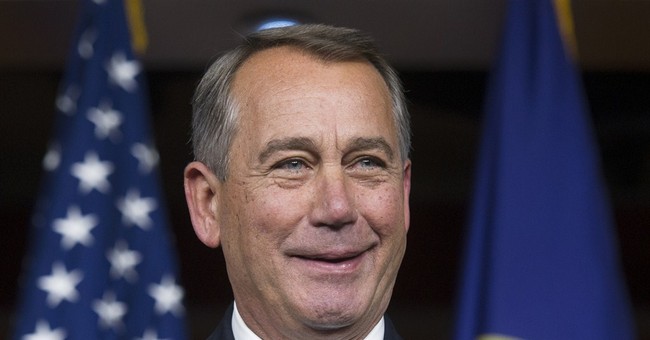 Despite grumblings from tea partiers about ousting House Speaker Boehner every time he’s seen as caving to Democrats, most recently on the standoff over DHS funding, he’s not going anywhere anytime soon. Why? Because House Democrats have his back. And without their support, there’s no way he can be ousted—not in this Congress, at least.

A number of right-wing Republicans, long wary of Boehner's commitment to GOP efforts attacking President Obama's policy priorities, have openly considered a coup in an attempt to transfer the gavel into more conservative hands.

But Democrats from across an ideological spectrum say they'd rather see Boehner remain atop the House than replace him with a more conservative Speaker who would almost certainly be less willing to reach across the aisle in search of compromise. Replacing him with a Tea Party Speaker, they say, would only bring the legislative process — already limping along — to a screeching halt.

“I'd probably vote for Boehner [because] who the hell is going to replace him? [Ted] Yoho?” Rep. Bill Pascrell (D-N.J.) said Wednesday, referencing the Florida Tea Party Republican who’s fought Boehner on a host of bipartisan compromise bills.

“In terms of the institution, I would rather have John Boehner as the Speaker than some of these characters who came here thinking that they're going to change the world,” Pascrell added.

“Then we would get Scalise or somebody? Geez, come on,” said Grijalva, who referenced House Majority Whip Steve Scalise (R-La.). “We can be suicidal but not stupid.”

Boehner, who has grappled with dissent from the Tea Party wing since he took the Speaker's gavel in 2011, has seen opposition to his reign grow this year, even as he commands the largest GOP majority since the Hoover administration.

That’s led to talk of a new coup, something that is more difficult to pull off after the election of a Speaker on each Congress’s first day of business. […]

The new push back against Boehner began in the earliest stages of the new Congress when 25 conservatives voted in January to strip him of the Speaker's gavel.

Boehner's troubles have only mounted since then, as conservatives have thwarted a number of his early legislative priorities, including a border security bill, an anti-abortion measure and a proposal to limit the federal government's role in public education — all considered by GOP leaders to be easy-pass bills that would highlight their new power in Obama's final two years in the White House.

More recently, Boehner's decision this week to pass a “clean” bill funding the Department of Homeland Security (DHS) has exacerbated conservatives' concerns about his leadership.

While the pushback against Boehner may be growing, there is no formal plot in the works to overthrow him, according to Rep. John Fleming, one of the founding members of the House Freedom Caucus.

"I have my differences with the speaker at times, both on tactics and on policy," Fleming told National Journal. "But we elected him speaker for two years, and there's no discussion or talk, among conservatives at least, about trying to remove him."

According to Fleming, at least, the whole controversy is entirely media driven. What a surprise.