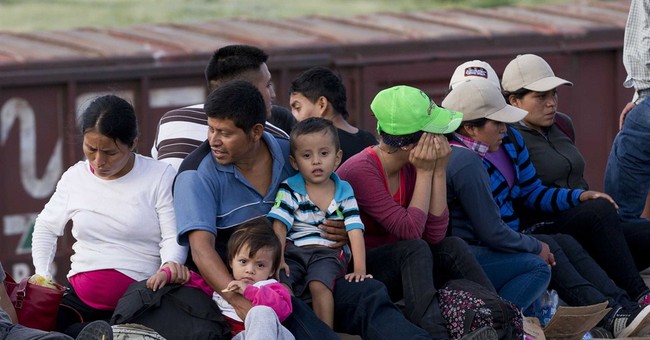 When tens of thousands of illegal immigrants from Central America crossed the border earlier this year, many of them had to be released on their own recognizance because there simply wasn’t enough space to detain them all. Now, a Houston television station has confirmed what we knew would happen all along: the vast majority of them never showed up for their immigration hearings.

After six months of requests, the Executive Office of Immigration Review told Houston’s KPRC that 96 percent of the more than 4,100 families released on recognizance and ordered deported did not show up to court, prompting the government to classify them “in absentia.”

A similar 92 percent of the more than 1,600 unaccompanied children to be deported did not show up.

The Executive Office of Immigration Review usually reports an 11 percent to 15 percent annual “in absentia” rate, far below this year’s jump.

Among the thousands who were caught and detained by Border Patrol, the court process remains sluggish. A mere 22 percent of the more than 30,400 families and unaccompanied children caught have received a court decision.

Thus, the White House’s focus on border apprehensions as a key indicator of border security is both “meaningless” and “deliberately misleading,” immigration expert Jessica Vaughan explains. “Apprehensions are not a metric of enforcement when illegal aliens are apprehended and then routinely released under the guise of "deportation proceedings", "asylum applications", or even "budget constraints".

Further, any proposals that claim to want to enhance border security and enforcement by providing more resources, more personnel, more technology, and more infrastructure for immigration agencies without addressing the underlying policies that serve to undercut enforcement should be viewed with great skepticism."

Given these catch-and-release policies and Obama's executive amnesty, what exactly is left to deter future border crossers? After all, many who did so this year have now disappeared and dispersed across the United States and are reaping the benefits thanks to American taxpayers who are forced to pick up the tab for everything from education to health care. No wonder Immigration and Customs Enforcement is already gearing up for a new spring surge.