School Districts Brace for Influx of up to 50,000 Unaccompanied Immigrants 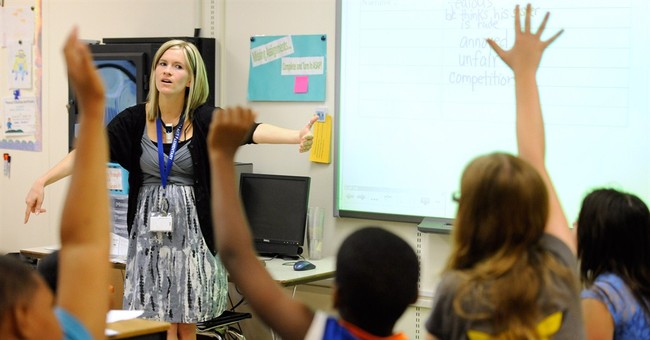 Back to school just got a lot more complicated for school districts across the nation, as many prepare to deal with enrolling up to 50,000 unaccompanied minors who recently entered the U.S. illegally.

[O]ther states have received thousands of unaccompanied minors, which could create a strain on some school districts. The highest number were released to relatives or other sponsors in Texas (5,280), followed by New York (4,244), California (3.909), Florida (3,809), and Virginia (2.856).

According to U.S. Customs and Border Protection (CBP), 62,998 unaccompanied alien children under the age of 17 have illegally crossed the southern border since October of last year. So there are still thousands of children and teens in detention centers waiting to be processed before they are released throughout the U.S.

The vast majority are from El Salvador, Guatemala, Honduras and Mexico, according to the CBP.

Educationally speaking, schools in America are already lagging behind their foreign counterparts. When compared to 64 other countries around the world in math, science, and reading, the U.S. ranked below average in math, and only average in reading and science, according to the Program for International Student Assessment’s 2012 report. The influx of children, most of whom do not speak English, will only make getting ahead all the more difficult.

“We don't know the educational background (of the students), if they've even been to school, the language issue and operational issues that could raise costs,” Francisco Negron, the National School Board Association’s general counsel, told USA Today.

Back in May, the Obama administration reminded public schools that they are required, by law, to provide children access to education, no matter what the student or their parents’ immigration or citizenship status is.

The cost to taxpayers, however, is not something that can be ignored. Some districts, such as Florida’s Miami-Dade County, have requested additional federal funding to support the flood of new students. In addition to language training, schools will need to account for social and psychological services as well as basic technology training, as many immigrant students have never seen a computer before.

"We haven't started school yet, so we are all just holding our breath to see what's going to come on the first day of school," Caroline Woodason, assistant director of school support for Dalton Public Schools in Georgia, told USA Today.