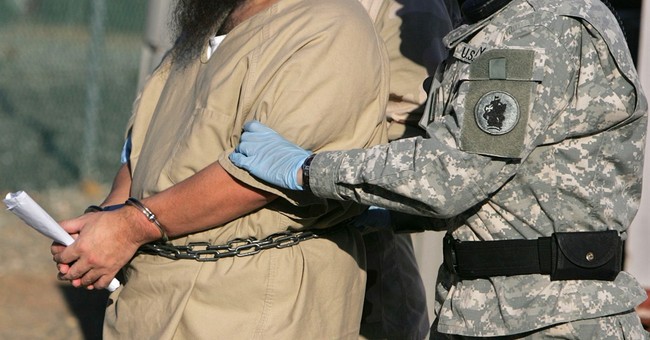 When the Obama administration released one of Guantanamo Bay’s longest serving detainees earlier this month—the first since May when five captives were released in exchange for Sgt. Bowe Bergdahl—we knew it was a clear sign more would soon be coming, much to Republicans’ dismay. Clearly, Guantanamo Bay has become the “new front in [Obama's] hard line against the incoming Republican Congress,” the Washington Examiner notes.

The Pentagon announced Thursday that four al Qaeda fighters from Yemen, including a senior figure who facilitated travel to Afghanistan for Arab extremists, and a Tunisian extremist would be transferred to Slovakia and Georgia.

The transfers leave 143 detainees at Guantanamo, which Obama has vowed to close. Republican lawmakers, who have been pressing the administration to stop releasing detainees amid reports that some former prisoners had joined the Islamic State of Iraq and Syria, were furious. […]

According to the latest report from the Office of the Director of National Intelligence, 107 of 620 detainees released from Guantanamo, or 17.3 percent, had been confirmed as returning to terrorism as of July 15, and another 77, or 12.4 percent, were suspected of having done so.

One of those, Abdul Raheem Muslim Dost, has emerged as a leader of the Islamic State in Pakistan, according to the Pakistani newspaper Dawn.

And on Saturday, the administration released yet another detainee: Muhammad al-Zahrani, who was returned to Saudi Arabia on the condition that he takes part in a militant rehabilitation program.

“If just one U.S. soldier loses their life over these transfers, we will have failed in our duty to the American people,” said House Armed Services Committee Chairman Buck McKeon. "What the Obama administration is doing is dangerous and, frankly, reckless. They have chosen many times to put politics above national security. It’s time they stop playing with fire and start doing what’s right. Until we can assure the terrorists stay off the battlefield, they must stay behind bars."

There are now 142 prisoners left.