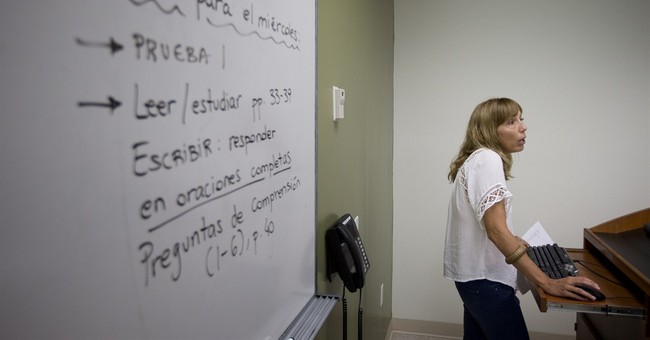 America. It used to be a place where speaking English wasn’t just the norm—it was a requirement to ‘make it’ in this country. When my grandfather came to America from Greece (legally, I might add) in the 1930s, English language courses and U.S. history were required to become licensed in his profession. Now, apparently, requiring English proficiency in the workplace is discrimination.

Via CNS News (emphasis mine):

The Equal Employment Opportunity Commission (EEOC), a federal agency tasked with enforcing workplace discrimination laws, is suing a private American business for firing a group of Hispanic and Asian employees over their inability to speak English at work, claiming that the English-language requirement in a U.S. business constitutes “discrimination.”

Judicial Watchreported Tuesdaythat the government is accusing Wisconsin Plastics, Inc. of violatingTitle VIIof the Civil Rights Act of 1964, which prohibits discrimination based on “national origin.” The government argues this includes the “linguistic characteristics of a national origin group.”

Judicial Watch’s blog editor and Spanish media liaison, Irene Garcia, told CNS News that the accusation is “ludicrous” and “an overreaching of government.” Private companies in the U.S. ought to be allowed to require employees to speak English, she said.

Garcia added that the lawsuit, filed on June 9, is just the latest in a slew of attempts by the EEOC and the Obama administration to go after American businesses for so-called “discrimination.” She cited numerous cases in which the EEOC has accused businesses of discriminating by requiring workers to speak English, running background and criminal checks, and enforcing company-wide restrictions on head coverings, including those worn by some Muslim women.

“We’ve seen some decisions that are kind of radical that we haven’t seen in the past, under Republican or Democrat administrations,” she said, claiming the EEOC under the Obama administration is “on a roll.”

Many lawsuits brought by the EEOC subjectively twist the Civil Rights Act of 1964 to include things it was never meant to cover, Garcia added.

“We’re seeing a lot of these kinds of law suits using his civil rights law to sue on behalf of all these different causes that I believe violate the spirit of the law,” Garcia explained.

This is Obama’s America.