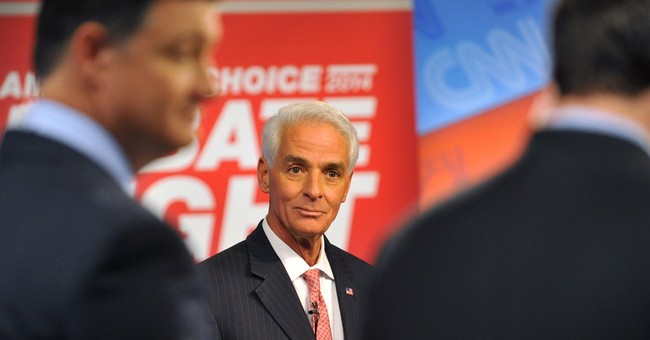 Florida gubernatorial candidate Charlie Crist, who left the Republican party after his governorship because he was primaried and defeated by Marco Rubio, has never wanted to admit what his real reason was for leaving the GOP. He left because Marco Rubio was going to beat him in a primary, so Crist took his toys and left. This fact would make him look like a sellout with no ideals, a power-mad egomaniac with an obsessive drive to wield the levers of power.

So Crist has fallen back on what might be the only thing more despicable than his actual reason for leaving the GOP: saying that Republicans are too racist for him.

In an interview earlier this year, he said that the GOP was too "unfriendly toward the African-American president... what they were doing, it was intolerable to me."

He also said he couldn't "imagine an equal measure of virulence for any politician whose skin was white."

Last night in the Florida governors' debate, Crist refused to back down from his assertion of don't-criticize-the-President-because-it's-racist. Here's the relevant portion from the transcript:

JAKE TAPPER: So, clarify if you would for Florida voters -- are you saying there are so many racists in the Republican Party you couldn't remain a Republican?

CRIST: No. I'm saying that that element exists.

Listen, my mother and father are Republicans. I love them to death and they don't have a racial bone in their body, racist bone in their body. What is at work here is a pretty simple thing, and if you remember back with me to 2008 and some of the e-mails that were distributed about the president by some members, not all, of the Republican Party, they weren't exactly flattering. And I think you probably can research and find out what I'm talking about. But it wasn't right.

And I can tell you that the reaction I had gotten from some in the Republican Party, leadership, wasn't tolerable to me, you know?

And it was pretty clear to me. It wasn't just because I was willing to work across the aisle with a Democrat to get the recovery funds to come to Florida. It was also pretty apparent to me because it was the first African-American president.

Listen, I don't enjoy saying that. It's not what -- you know, it's fun to say, but I'm going to tell the truth and those are the facts.

Crist has never actually named which politicians or activists or members of the GOP were saying "intolerable" things. He merely says "you can probably research and find out what I'm talking about." This is merely insinuation; Crist wants to say that Republicans are racist without actually saying so, and it's despicable.

I've "done the research" and it's difficult to know what the hell Charlie Crist is talking about. Here's the truth: there are some racists in America. Racism isn't over. But if you actually look at the data, as economist Alex Tabarrok did, you'll conclude, as he did, that "racists split about evenly across the [political] parties. No party has a monopoly on racists."

That includes Charlie Crist, member of the Democratic party. Perhaps he hasn't "done the research," so to speak, on the members of his new political party, but it might be good for him to do something he enjoys quite a bit - take a look in the mirror - if he's hunting for racists.