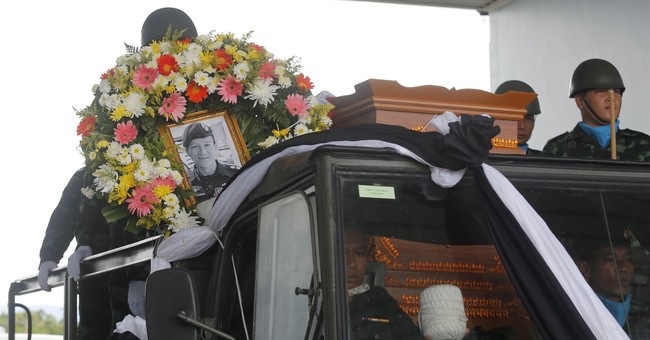 On July 6th,  Major Saman Gunan died while helping rescue the soccer team of 12 boys and their coach who have been trapped in a flooded cave since June 23rd.

Gunan, a former Thai Navy SEAL diver, died from a lack of oxygen during an attempt to deliver supplies to the victims. He had delivered the oxygen canisters, but on his way back passed out from a lack of oxygen. Authorities are still working in their rescue attempts as oxygen levels in the cave continue to decrease and the weather continues to worsen.

“Saman once said we never knew when we would die. We can’t control that, so we need to cherish every day,” Waleeporn told BBC News.

“We can no longer wait for all conditions (to be ready) because circumstances are pressuring us,” Thai SEAL commander Rear Adm. Arpakorn Yookongkaew told a news conference. “We originally thought the boys can stay safe inside the cave for quite some time, but circumstances have changed. We have limited a amount of time."

Gunan was a member of Thailand’s Elite Navy Underwater Assault Unit. After he had retired from the elite Navy SEAL unit of their 30th class who retired to work at Bangkok’s Suvarnabhumi Airport as a security officer, and worked there since 2006.

Gunan did not die in vain.

“The determination and dedication of Saman will always be in all of our frogmen hearts. Today Saman rests. We will complete this mission, just as Saman intended,” they vowed, signing off with a little cheer adopted from the U.S. Navy: “Hooyah Hooyah Hooyah,” reported the Washington Times.

Gunan’s funeral was held in the province of Rot Et.