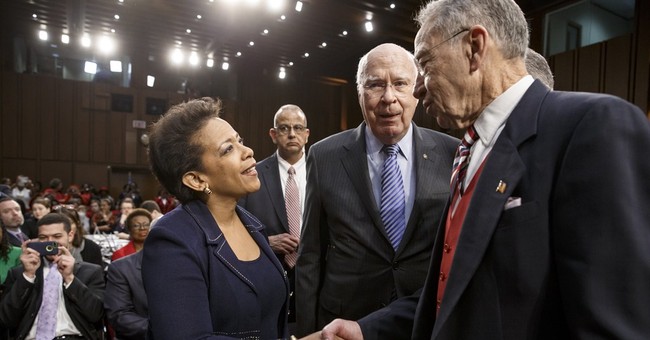 After hours of testimony this week from witnesses and questions from lawmakers sitting on the Senate Judiciary Committee, Attorney General Nominee Loretta Lynch has passed her first test on the way to becoming America's top law enforcement officer (despite justifying President Obama's executive action on illegal immigration and saying everyone in America has a right to work, regardless of how they got here).

One thing is clear after six years under Attorney General Eric Holder's leadership: there's a lot of damage to clean up. The question is whether Lynch is willing and able to take on that task.

“I appreciate Ms. Lynch coming before the committee. She has impressive qualifications, but a number of members want to know whether those qualifications can transfer to correcting the serious problems at the Justice Department. Today’s witnesses provided valuable insight into those problems and I thank them for the time each of them took to share their unique perspectives," Grassley released in a statement late Thursday night. “As Chairman, I was very pleased with the two days of testimony. There was a lot of juggling with the votes on the floor, something we’re not used to around here, but overall it was a productive session. I do regret, however, the treatment the outside witnesses received today. It was unfortunate that one member felt the need to tarnish the integrity of Americans who came before the committee to help us evaluate a nominee for a very important position. Every single one of these witnesses speaks directly to Ms. Lynch’s nomination. The question in my mind is if Ms. Lynch will take the issues seriously and work to fix them. In addition, it wasn’t too long ago that Democrats agreed it was perfectly appropriate to call witnesses to address what they viewed as problems at the Justice Department."


The mistreatment Grassley is referring to came from Democrat Senator Sheldon Whitehouse, who used his time during the second confirmation hearing yesterday to lecture witnesses and scold them for pointing out current problems inside the Department of Justice. Whitehouse also derided witnesses for criticizing Holder and said it was unjust the sitting attorney general wasn't in the room to defend himself against charges. He even went so far as to say witness criticisms of DOJ policies and personnel simply represented "Fox News soundbites" and "conspiracy theorists."

Now that Lynch's nomination hearings are over, lawmakers will submit additional questions in writing and are expected to vote on her confirmation next month.

“I look forward to reviewing the hearing record and reading her answers to our additional questions,” Grassley said.