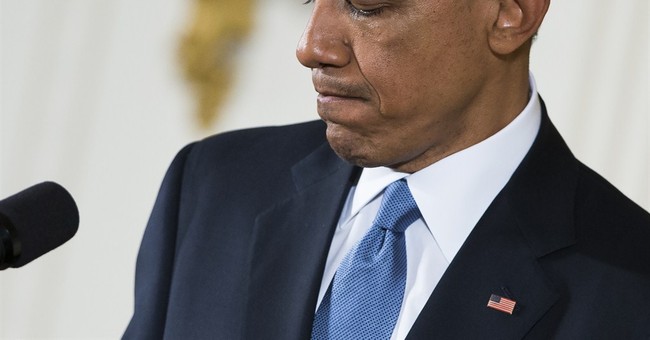 During his post-midterm press conference yesterday, President Obama falsely claimed that Obamacare is working for Americans all over the country. Based on his rhetoric, he also seemed to fail at understanding the damage votes for his signature piece of legislation did to his former Democrat majority in the Senate.

According to Tuesday's results and elections over the past few years, 28 Senators who voted for Obamacare will no longer be holding seats on Capitol Hill when January rolls around. More from Philip Klein:

On the Senate side, going into Tuesday’s elections, 24 senators who voted for Obamacare were already out or not going be part of the new Senate being sworn in on January.

To be sure, it isn’t fair to attribute all of the turnover in the chamber to Obamacare. Many senators voted for Obamacare and lost re-election battles in which they were hit hard for their support for the law, and other Democrats were forced to retire because they had no hope of getting re-elected given their support for the law. But in some cases — such as John Kerry leaving his seat to become secretary of state, or Robert Byrd passing away — Obamacare clearly had nothing to do with it.

That having been said, as of this writing, 15 Senators who voted for Obamacare either failed to win reelection or declined to run for reelection and had their seats turned over to Republicans. That number is likely to grow once the results are in from the Senate runoff in Louisiana, which Mary Landrieu is expected to lose.

The Obama administration made it obvious they knew Obamacare was a liability going into the midterms, which is why they pushed open enrollment and insurance rate hikes past the election to November 15. That move proved to be unsuccessful in saving Democrat seats.

Mitch McConnell, who will become the new majority leader next week, said yesterday that he understands President Obama won't sign a repeal of Obamacare, so Republicans will offer other solutions in an attempt to strip the legislation of controversial and economically damaging parts. Obama said he was open to hearing Republican ideas about how to make Obamacare work better.