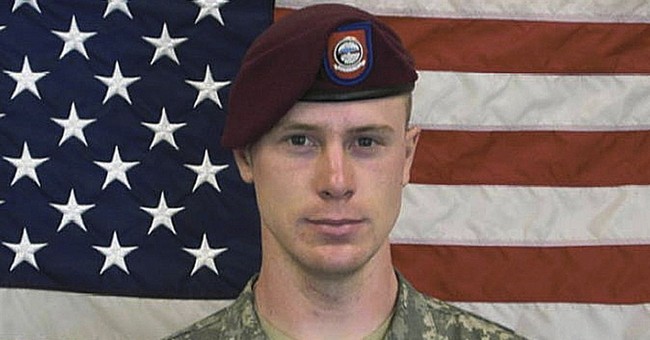 Yes, you read that headline correctly. Bowe Bergdahl, the Army Sgt. accused by his fellow platoon members of desertion and possible collaboration with the Taliban against the United States, is headed back to active duty. More from CNN:

Army Sgt. Bowe Bergdahl has finished undergoing medical care and counseling at an Army hospital in San Antonio and could return to an Army unit on a Texas post as early as Monday, a defense official tells CNN.

Bergdahl was held captive by militants for five years before he was released in May in exchange for five senior Taliban members held by the U.S. military. He has always maintained his active duty status. He cannot retire from the service or be discharged until the investigation concerning his disappearance and captivity in Afghanistan is complete.

For about three weeks, Bergdahl has been an outpatient at the San Antonio hospital, and military officials have interviewed him about his time in captivity.

Bergdahl is set to take a job at Fort Sam Houston, the Army post in San Antonio, according to an Army statement Monday. He will return to "regular duty within the command where he can contribute to the mission," the statement said.


At this point, not a single soldier from Bergdahl's platoon has come forward to defend him or to justify his disappearance. Army Spc. Cody Full, who testified in front of Congress last month about Berghdahl's disappearance, is not impressed.

I guess Honor and Integrity doesn't matter much anymore.


Full will be on with Sean Hannity tonight at 10 pm et on Fox News to discuss this latest development.