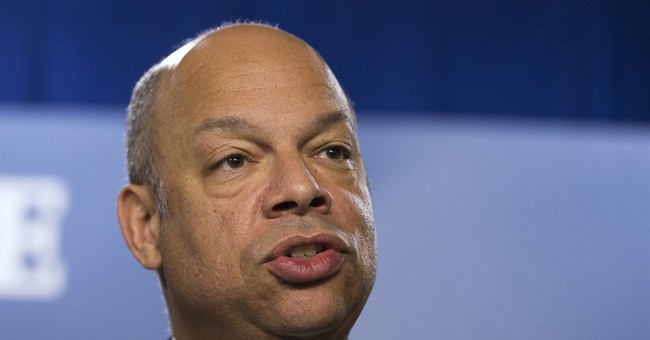 Johnson reiterated that multiple government agencies are working to address the crisis, including the Department of Defense, Homeland Security, HHS, FEMA and others in addition to private aid groups like the Red Cross. Thousands of children being house in Texas, Arizona and on military bases are receiving medical care. ICE is in the process of finding legal guardians inside the United States related to children, the majority of whom are from Central America, with a goal of getting children transferred.

Further, Johnson announced he will be traveling to a handful of countries south of the border this summer in order to address the crisis at a local level and to try and stop a greater influx.

"I've been in contact with the ambassadors and other officials of all four countries, Guatemala, El Salvador, Honduras and Mexico," Johnson said, adding that he will be doing foreign media interviews in an effort to educate parents about the dangers of sending their children to the United States alone. News outlets in these countries have been reporting that if parents send their children to the U.S., they will not be turned away.

President Obama's Deferred Action for Childhood Arrivals [DACA] has been blamed for the massive influx of unaccompanied children into the United States since the program was implemented in 2012. Johnson tried to stop the bleeding on that accusation today by reminding everyone DACA only applies to children brought to the United States illegally by their parents before 2007.

Government officials estimate by the end of 2015, 145,000 unaccompanied minors from Central America will be apprehended in the United States. Current conditions where children are being held have been described as "prisons" and as inhumane.

About the Adam Schiff and Ed Buck Photo Rumor...
Redstate
Schiff on calling Hunter Biden in exchange for John Bolton: "This isn't like some fantasy football trade"
Hotair