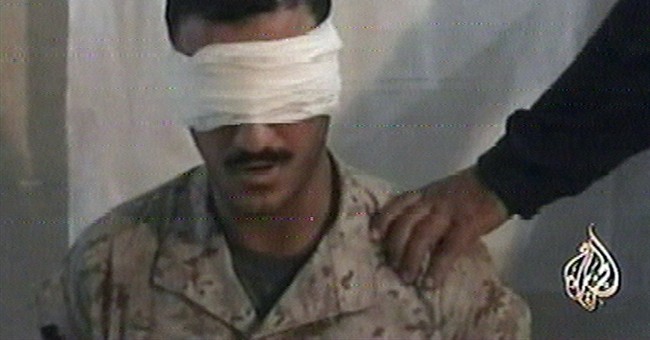 Cpl. Wassef Ali Hassoun, a Marine charged twice with desertion, has turned himself in after mysteriously disappearing in Iraq nearly a decade ago. Yesterday Hassoun was flown from an undisclosed location in the Middle East to Norfolk, VA and will be transferred today to his home base at Camp Lejeune in Jacksonville, NC.

According to the Marine Corps headquarters, NCIS helped Hassoun make his return to the states. AP reports:

A written statement Sunday by Marine Corps headquarters said the Naval Criminal Investigative Service "worked with" Hassoun to turn himself in, return to the United States and face charges under the Uniform Code of Military Justice. It provided no details about where Hassoun was when he made these arrangements.

A naturalized U.S. citizen born in Lebanon, Hassoun moved to the U.S. with his family in 1999. Shortly thereafter, he joined the Marines as an Arabic translator and was trained as a motor vehicle operator.

Hassoun originally abandoned his unit in Fallujah in June of 2004, staging a hostage video and turning up at the U.S. embassy in Beirut just a month later. He claimed to have been kidnapped by Islamic extremists, although evidence suggested otherwise.

He was sent back to Camp Lejeune and underwent a five-month investigation. Hassoun was charged with desertion, theft of a military firearm and theft of a Humvee, which he used to drive off base.

Hassoun denied desertion, clinging to the story of being detained against his will:

Shortly after his return to the U.S., Hassoun said in a public statement that he had been captured by insurgents in Iraq and was still a loyal Marine. "I did not desert my post," he told reporters. "I was captured and held against my will by anti-coalition forces for 19 days. This was a very difficult and challenging time for me."

While awaiting judicial proceedings, Hassoun was granted leave to visit family in Utah. In January of 2005, he fled the country through Canada and returned to his country of birth in Lebanon. Hassoun never returned to base and was charged again as a deserter.

While this case draws several similarities to that of Bowe Bergdahl, many are wondering on what terms Hassoun agreed to return to the U.S.