Analysis: Why Tuesday's Primary Results Are Good News for Republicans 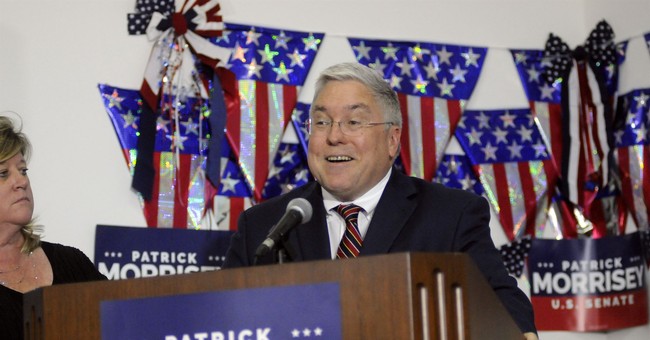 Tuesday's primary elections in four states resulted in some promising signs and positive outcomes for the Republican Party.  A few thoughts on last night's results: (1) Much of the media attention in advance of the voting was showered upon an, um, idiosyncratic businessman running for Senate in West Virginia.  President Trump anti-endorsed Don Blankenship -- who was recently released from prison -- in a tweet earlier this week, drawing a rebuke from Blankenship, who described himself as "Trumpier than Trump."  West Virginia Republicans disagreed, evidently, relegating Blankenship's bizarre campaign to a distant third place finish.  That's a win for Trump and a win for the party.  Senate Majority Leader Mitch McConnell's team taunted Blankenship on Twitter, clearly pleased to have the opportunity to troll the man who'd dubbed their boss a "swamp captain" and "Cocaine Mitch" while blasting McConnell's "China family."  For fans of the show Narcos, this is a pretty damn good meme:

(2) The victor in West Virginia is Attorney General Patrick Morrissey, a strong conservative with an extensive record of fighting the Obama administration in court.  He's also won statewide before.  Joe Manchin may not be easy to knock off, but Morrissey probably gives Republicans their best shot.  But there were warning signs for Manchin in last night's numbers, too (in addition to his overall polling struggles):

That was against a relatively conservative Dem, so maybe start to get interested if Swearingen gets more than 20% of the vote.https://t.co/0Vl884dx2G

Manchin's unknown and virtually penniless opponent ended up surpassing 30 percent of the primary vote.  Republicans blasted out this statement in response: "Manchin received just 69.8% of the vote against Paula Jean Swearengin, a political novice running on an anti-coal platform. This showing is a marked decline from his support in 2012, when Manchin received almost 80% of the Democratic primary vote. Even more distressing for Manchin is the decline in the number of votes he received. Manchin got 52,302 fewer votes this yearthan in his last primary, even while 47,710 more votes were cast in the Republican primary than in 2012. And compared to the 2014 midterm, Republican turnout was up 61% yesterday, compared to just a 14% increase for Democrats."

(3) Turnout and enthusiasm have been worrisome signs for Republicans throughout 2017 and 2018.  This week's outcomes offer some relatively rare rays of sunshine on that front for the GOP.  Look extra hard at those Ohio stats:

(4) Speaking of Indiana, party insiders are pleased with the nomination of businessman and outside Mike Braun, who will bring a considerable amount of personal resources to the table as he seeks to unseat Joe Donnelly in a state Trump carried handily.  Aside from the self-funding aspect, Braun has other strengths, too:

Nice thing about Braun nomination for GOP is that his biggest primary advantage carries over into general. Clearly best positioned to run against Donnelly & DC, and without a voting record of his own to defend.

Like anyone, he's got vulnerabilities, too -- and lefty activists are already promising to tear into him -- but I don't think they'd have picked Braun as their ideal opponent.  In that respect, the organized Left went 0-for-2 in key primaries last night, having actually spent money boosting Blankenship in West Virginia.  When Democrats get to hand-select their opponents, bad things happen. Republican voters wisely decline to play along in these races.

(5) Last but not least, a here's a new data point from the state of Florida, where the popular sitting GOP governor is challenging a shockingly unknown Democratic incumbent:

I'll leave you with this bottom line take-away from the Executive Director of the National Republican Senatorial Committee:

Tonight is a great night for the Majority. Maybe its time to do fewer deep dives on Beto and more pieces on all of the VERY vulnerable Democrats on the map in 2018.