Rand Paul: I Bet My Critics Are Rooting for a Terrorist Attack, Just So They Can Blame Me 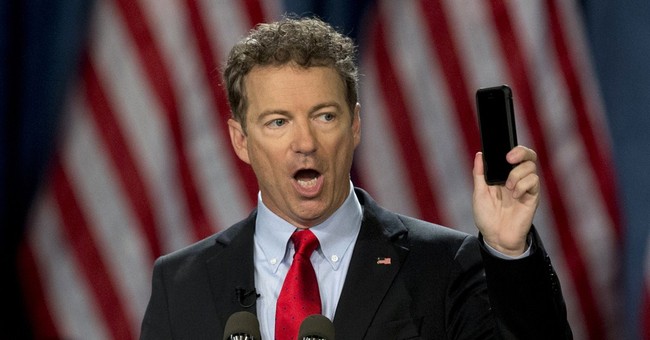 In case you're just tuning into the NSA/surveillance battle on Capitol Hill, a handful of the PATRIOT Act's provisions expired last night, with Sen. Rand Paul declaring temporary victory over what he calls an excessive and illegal federal surveillance state. The Senate is currently debating amendments to a House-passed compromise bill, which among other things alters how so-called 'metadata' can be accessed and reviewed by the government. The 'USA Freedom Act' overwhelmingly sailed through the GOP-controlled House of Representatives and is supported by the Obama White House. Some national security hawks say some of the law's provisions represent needless reforms to remedy imaginary problems, and will only hamper the intelligence community's already-difficult task of ferreting out asymmetrical national security threats.  Paul and his allies say the compromise doesn't go far enough, though they're now conceding it will likely pass.  This clash of practical concerns and principles has been acrimonious at times, so much so that Paul chose not to attend a Republican caucus meeting over the weekend, telling reporters that he doubted the atmosphere would be "collegial." Motives have been impugned on both sides, with Paul's critics heavily implying, if not stating outright, that he's engaged in reckless grandstanding in furtherance of his presidential campaign (is he necessarily helping himself with Republican voters, though?); Paul fired back with this jaw-dropper, accusing opponents of "secretly" hoping for a terrorist attack:


"Some of them, I think, secretly want there to be an attack on the United States, so they can blame it on me."

Yikes.  Might we all be better off by just stipulatating that (a) Rand Paul isn't deliberately trying to make terrorists' lives easier for his personal political benefit, and (b) those who disagree with his analysis and methods aren't, uh, rooting for the terrorists out of spite?  C'mon.  This wasn't Paul's finest moment, policy implications aside.  When it comes to substance, the more hawkish contingent in this battle has been frustrated by what they see as a steady stream of demagoguery and misleading rhetoric from the other side, quarterbacked by Kentucky's junior senator.  National Review's Rich Lowry wrote a useful column last week that cuts through the fog and clarifies some important truths:

You can listen to orations on the NSA program for hours and be outraged by its violation of our liberties, inspired by the glories of the Fourth Amendment and prepared to mount the barricades to stop the NSA in its tracks -- and still have no idea what the program actually does. That's what the opponents leave out or distort, since their case against the program becomes so much less compelling upon fleeting contact with reality. The program involves so-called metadata, information about phone calls, but not the content of the calls -- things like the numbers called, the time of the call, the duration of the call. The phone companies have all this information, which the NSA acquires from them. What happens next probably won't shock you, and it shouldn't. As Rachel Brand of the Privacy and Civil Liberties Oversight Board writes, "It is stored in a database that may be searched only by a handful of trained employees, and even they may search it only after a judge has determined that there is evidence connecting a specific phone number to terrorism."


The first sentence is bold contains several key distinctions that too often get lost in this emotional debate.  The second emphasized sentence is somewhat reassuring, though judicial oversight was stepped up only after the Snowden reveations -- and the database mentioned is going away. Former federal prosecutor and terrorism expert Andy McCarthy adds his trenchant legal analysis here.  McCarthy notes that a recent decision by the Second Circuit Court of Appeals did not invalidate the metadata collection program as unconstitutional, but rather as coloring outside the lines of existing statute.  But given the various disclosures that have come to light in recent years, many Americans have grown uncomfortable with the vast spying apparatus of the US government.  Defenders of the programs argue that they're essential to safeguarding the homeland, often adding the vexing postscript that many of the intelligence communities' successes must remain secret, by their very nature.  Another counterargument they advance is that "gadflies" like Rand Paul are mounting a hypothetical case against what the government's capabilities could be used for, rather than what they're actually being used for.  "Sure, these technologies and systems might be used by a tyrannical regime to erect an omnipresent and abusive surveillance state that targets all Americans -- but couldn't a similar argument be made regarding the extraordinary power of the US military?"  Fair point.

Then again, sneering about "conspiratorial" fear-mongering might be a bit more convincing if, say, a major appendage of the federal bureaucracy hadn't just recently been caught grossly misusing its power by wrongfully targeting ordinary Americans, and lying about it.  And the pooh-poohing might sway more people if the Director of National Intelligence hadn't flat-out lied (or inaccurately "misspoken," if we're being charitable) about records collection, while under oath.  Mistrust of government isn't the stuff of wacky tinfoil hats; all too often, it's richly deserved.  It's incumbent upon the government to earn and keep the trust of the governed.  Rand Paul is tapping into a large reservoir of suspicion harbored by millions of Americans.  Even if you disagree with his policy posture, and support the USA Freedom Act (or even a broader reauthorization of the existing PATRIOT Act), he shouldn't be reflexively cast as a disingenuous nuisance for challenging the status quo.  And aren't these the sorts of debates we ought to be having in a free society -- even if they're "phony," in large measure?  I'll leave you with Conor Friedersdorf outlining how this episode underscores our "strange democracy," and this New York Times piece describing how the NSA is using "multiple workarounds" to keep the now (technically) lapsed surveillance programs more or less humming right along. That reality is either encouraging or infuriating (or maybe even a pinch of both), depending on one's perspective.