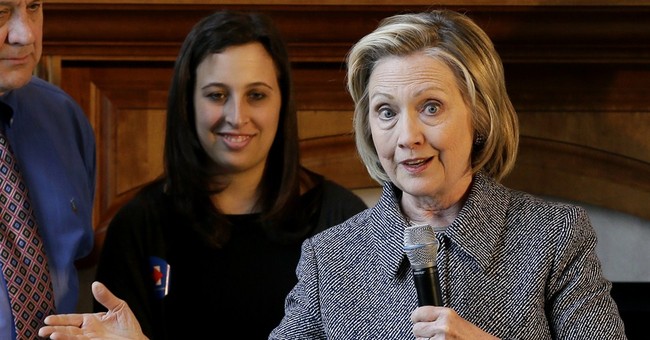 Hillary Rodham Clinton, a declared candidate for the presidency of the United States of America, did not deign to subject herself to a single question from the news media for 28 consecutive days. That streak ended after a photo-op in Iowa today, when Her Majesty magnanimously (and extremely briefly) entertained a handful of questions, prior to being whisked away by aides. Fox News' Ed Henry appeared to have finally broken through by shouting a question across the room, rudely interrupting Mrs. Clinton's choreographed event.  The candidate was characteristically gracious and genial in her response:


Henry: [Will you take questions from us?]

HRC: "I might. I'll have to ponder it.  I will put it on my list for due consideration."

The imperiousness and sense of entitlement was palpable as America's beleagured, sneering, put-upon sweetheart contemptuously sniffed at members of the free press for attempting to do their jobs.  Following her stilted Q&A with supporters (which included this bold answer on trade proposals), Mrs. Clinton generously accepted Henry's request and chose to submit to fleeting questioning from a waiting gaggle of journalists.  Over the course of a few short answers, she affirmed that she's "proud" of the Clinton Foundation, downplayed a query about the Sid Blumenthal scheme by lamely chalking her actions up to keeping in touch with "old friends," and urged the State Department to release her emails -- dismissing timing concerns by asserting that those communications don't belong to her.  And then, like a vapor in the wind, she was gone.  The official Hillary Questions Clock was duly reset, and now the press is back to panting about when she might next interact with them.  We've reached a point where a presumptive major party presidential nominee lowering herself to field two minutes' worth of questions from reporters somehow qualifies as a breaking news event:

Breaking News! The 2016 campaign in one photo pic.twitter.com/ISbIkwKfAU


Let's circle back to Hillary's reply to the question about her emails:

Hillary Clinton in Iowa says she wants to urge the US Department of State to release her emails as soon as possible.


That soundbyte is designed to make it seem as though she's an open book, a gallant public servant with nothing to hide.  It neglects to acknowledge that the State Department never received more than 30,000 of those emails because they were unilaterally deleted by her lawyers, without any independent oversight.  (For good measure, her team altered its tale about the process by which they destroyed those thousands of communications).  And her insistence that her official emails don't belong to her, while technically true, is particularly brazen.  The entire reason she set up a bootleg, national-security-compromising email server was to exert total control over what emails were, and were not, accessible via FOIA requests, Congressional investigations, etc.  Her inner circle determined which messages were acceptable for public consumption, and turned those -- and only those -- over to State.  Everything else was wiped away.  The Federalist's Sean Davis has a few suggestions for how the media might fight back against Team Hillary's shabby treatment:

There’s a simple solution to this problem. There’s a very simple way to incentivize Hillary to do the unthinkable and *gasp* answer questions from those whose job it is to solicit information from candidates for public office: ignore her entirely. As political consultant Rick Wilson noted in an extended Twitter rant this morning, media coverage is the oxygen that keeps candidacies alive. Without it, they suffocate and die. Yes, paid media in the form of massive ad buys is important, but it’s nothing compared to the power of earned media. In politics, you only matter if you’re on the news...Pull the reporters off the plane and off the bus. No more TV cameras at her events. No more wire or pool coverage of her stilted campaign Q-and-A sessions. No more front-page stories about this or that Iowa event. No more cut-and-paste coverage of canned, calculated quotes.

If that doesn’t work, then you don’t just continue the blackout. You replace the column space, the pixels, the TV time that you would’ve spent on Hillary’s campaign events with wall-to-wall coverage of Hillary’s scandals. What happened to the e-mails? Why was Hillary paying a nutcake war profiteer who’d already been banned by the White House to give her advice on foreign policy? Why did Hillary approve a massive uranium boondoggle for one of her tax-exempt group’s biggest donors? Why did Hillary refuse to disclose millions in donations she received from foreign governments while she was serving as the U.S. Secretary of State? It wouldn’t take long. Maybe a few days. But by blacking out coverage of her campaign and replacing it with coverage of the myriad ongoing Clinton cash and corruption scandals, the Hillary campaign would quickly change its tune.


The chances of any of that actually happening are virtually nil, of course, and Hillary knows it. The press won't treat her like a Republican (flooding the zone with indignant negativity), and they won't place a retaliatory gag order on their coverage of her regal glide. And even if they tried, it wouldn't hold. So the dysfunctional, borderline-abusive relationship remains intact, as Hillary nods and smiles her way through what Allahpundit describes as "daily simulacrums of interaction with the voting public." I'll leave you with GOP strategist Rick Wilson's extended Twitter rant, referenced in Davis' piece above.  Righteous, and, I fear, futile.